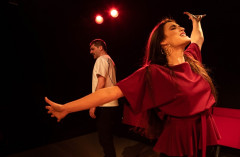 Playing at the Trafalgar Studios 2 until the 7th of March, Opera Undone: Tosca & La Bohème sees new programming by The Kings Head Theatre in the West End for the first time.

Opera Undone: Tosca & La Boheme makes like a theatrical expresso. Reimagining some of the operatic canon’s most famous works, this new initiative from The Kings Head Theatre gives Giacomo Puccini’s classics a radical treatment. Sung entirely in English, with translation by Musical Director David Eaton and Director Adam Spreadbury-Maher, both Tosca and La Bohème have been compressed into 60-minute powerhouses.

Performed in the cramped belly of the Trafalgar Studios, a piano (played live by Eaton) sits on the doorstep of the stage. Presented in-the-round – which adds to the all-encompassing quality of the company’s voices – the audience are literally pressing their noses up against the action. Tosca sees an immediate explosion of song. Despite the marked limitations in terms of space, the distance between its principal characters is notable. Tonight played by Fiona Finsbury, Tosca and her lover Cavaradossi (a passionate Roger Paterson) embark on an odyssey charged by love at its most animal.

Carnal lust it seems, is the theme of the evening. Tosca in particular, is coloured by male dominance; tragedy caused by the primacy of love and love-making. In spite of this, the heightened nature of opera leads to unexpected moments of comedy – an element furthered by the intimacy of the theatre. This good humour is also a symptom of clever translation from the original Italian, which, for the most part, retains its highly-caffeinated charge. Canny shifts in lighting (designed by Nic Farman) and set (Amanda Masarenhas) also help to maintain a sense of movement throughout. Though, at around the three-quarter mark, the performance becomes somewhat lukewarm.

Despite the actions of its characters, Tosca is the more faithful of the two pieces. La Bohème sees a striking transformation – its narrative transposed from 1830’s Paris, to modern-day London. This adds a certain dynamism onstage. Nods to Uber, equity, and most importantly, the dating app Grindr, all add an undeniable comedy. Similarly, innovative moments of audience interaction allows for huge entertainment value. As with Tosca, La Bohème begins at full-tilt; hours become minutes, the minutes, seconds. Meditations on modern relationships too, especially in regards to monogamy and polyamory, make for pertinent spectatorship.

Told by a group of four, La Bohème's internal workings (motored by Michael Georgiou’s wicked comic timing and Honey Rouhani’s transgressive sexuality) feels like that of a group chat. Together, their voices overlap and harmonise simultaneously, boosting the story's already accelerated qualities. Unfortunately, La Bohème is far superior to its predecessor, meaning the event as a whole doesn’t quite satisfy. 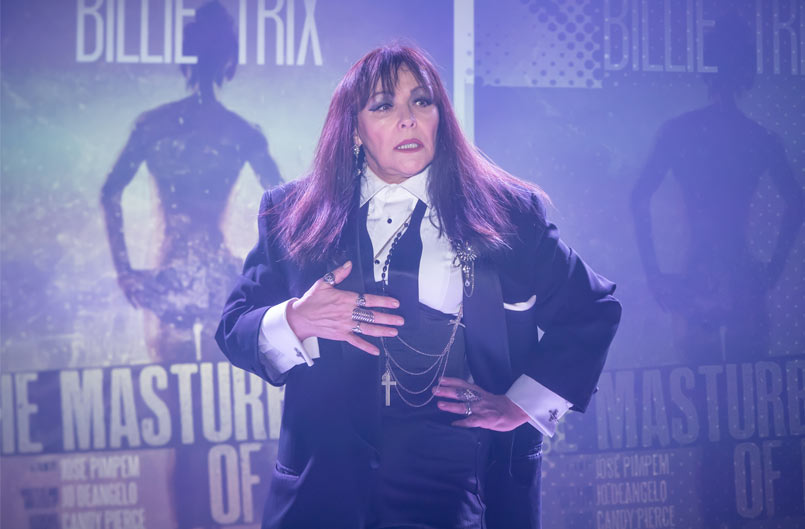 Jonathan Harvey’s egomaniacal creation Billie Trix — self-proclaimed icon, rock-star and screen-goddess — hits the stage again, nearly 20 years after Frances Barber first inhabited the outrageous character in Closer to Heaven. “I Am Art” she declares - and who are we to argue?