Now showing at the Novello Theatre

Disabled theatregoers and their carers can get discount tickets. Please phone the Novello Theatre access line on 034 4482 5137. 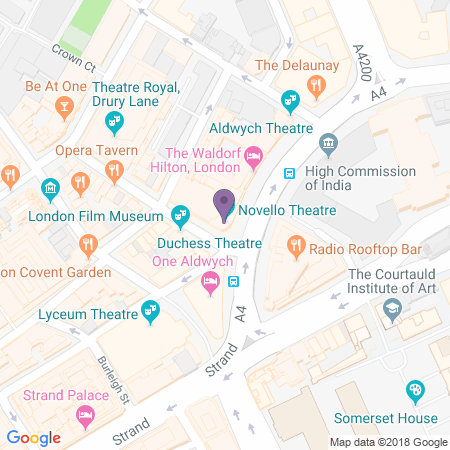 Created at the height of the Art Nouveau period, the Novello theatre is built from beautiful pale stone in classical ancient Roman style, with ornate carving and magnificent pillars on the outside and inside, a massive mural of chariots racing above the stage.

Designed by W.G.R. Sprague, whose lifetime love for the theatre saw him designing an impressive thirty three new theatres during his forty year career, the Novello, then called the Waldorf, features a beautiful façade in pale Portland stone with a sumptuous Louis XIV-style interior full of real marble and golden gilt. The last three-tier theatre to be built in London, it is still full of period features: a visual feast of decorative panels, friezes and intricately patterned brass.

Originally named the Waldorf Theatre, as an extension of the marvellously posh Waldorf Hotel nearby, the venue’s first decade was rocky to say the least. In 1913 it was re-named the Strand Theatre, famous for continuing to host productions throughout the First World War’s fierce bombing raids. During WW1 the theatre was managed by Julia Neilson and Fred Terry, the husband and wife team, showing a collection of short run productions including the huge 1915 hit The Argyle Case.

The Second World War also damaged the building but its most successful run took place during the war years: the British classic Arsenic and Old Lace ran there between 1942 and ’46, when it was called The Strand Theatre, and was seen live by Queen Elizabeth.

The writer William Golding, of Lord of the Flies fame, created his first theatre play for the Strand theatre in 1958, a comedy called The Brass Butterfly. The Rat Pack took over in the early years of the twenty first century, after which it closed for six months for refurbishment to celebrate its 100th anniversary and was renamed the Novello Theatre after Ivor Novello, the composer and actor who lived in a flat in the building for almost four decades.

Past shows at the Novello Theatre

The theatre’s early years saw performances of Sailor Beware, which ran for three years during the 1950s. A Funny Thing Happened on the Way to the Forumin ran for two years in the 1960s. No Sex Please, We’re British ran for an astonishing eleven years and Tom Stoppard’s smash hit The Real Thing lasted three years in the 1980s. The musical Buddy, telling the story of Buddy Holly, ran for seven years in the ‘90s.

There’s an infrared system in the theatre’s auditorium. While guide dogs aren’t allowed in the auditorium itself, theatre staff are happy to look after guide dogs while their owners enjoy the show. There’s access for wheelchairs off Catherine Street, but the venue isn’t suitable for scooters. There are transfer seats for one wheelchair per performance, in the Dress Circle. If you can’t transfer from your wheelchair, there are also suitable spaces in the Dress Circle.

We’re a prime destination for a wide variety of seat types and prices, with excellent availability on the full range of Novello Theatre tickets.