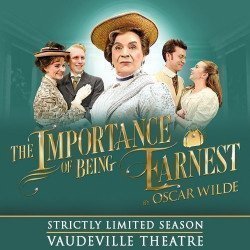 The Importance Of Being Earnest Tickets

About The Importance Of Being Earnest 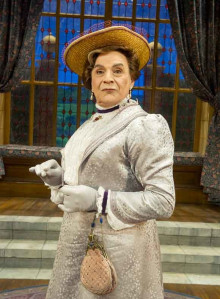 The Importance Of Being Earnest description

The Importance of Being Earnest – A handbag?

It’s the tail end of the Victorian era. The strict social code the time is so famous for is at its most powerful. And Oscar Wilde mercilessly took the mickey out of it. It was a risky business considering he flouted the code at every turn and his homosexuality put him at constant risk of imprisonment. But he wrote The Importance of Being Earnest anyway, to the utter delight of his many fans. Soon afterwards a nasty row with his lover’s father led to disaster, with a court case, an eventual conviction for ‘gross indecency’ and a sentence of hard labour. And that was that. The production is directed by Adrian Noble.

The Importance of Being Earnest - The story

Jack and Algernon are rich and posh. Jack lives quietly and respectably in the country with his young ward Cecily. He has invented a naughty younger brother who he uses as an excuse to visit London whenever he wants to escape from the countryside. Algernon, in London, has also dreamed up an imaginary friend, the invalid Bunbury, who he ‘visits’ in the country whenever he wants to get out of a social occasion he doesn’t fancy.

Jack wants to marry Algernon’s cousin Gwendolen but her mother, Lady Bracknell, is a stupendously snobbish force to be reckoned with. Jack was abandoned in a handbag at Victoria station and is of uncertain parentage, which makes convincing Lady Bracknell of his worth a very tough task.

Algernon visits Jack and introduces himself to Cecily as Ernest, knowing she is captivated by the tales of Ernest’s wickedness, and they become engaged. But when Jack arrives home and tells everyone Ernest is dead, things start to unravel…

The Importance of Being Earnest theatre tickets – Hilarious period satire

Want premium, full price or discount The Importance of Being Earnest tickets? We offer excellent availability on all seat and ticket types.

The Importance Of Being Earnest reviews

Nothing to write home about

Excellent show, really enjoyed it, acting was extremely good, laughed out loud, so funny, would recommend it to anyone

Couldn't attend due to illness, no cancellation policy, so wasted money

Best at being Ernest

We very much enjoyed the show. It was a very good production of a play I have seen many times before. All the actors & actresses were excellent. It has good sets. For anyone who likes this sort of theatre I recommend that you go and see it.

The world is blessed to have David Suchet! And the whole cast are just sooooo fabulous! My husband in Norway gave me a plane ticket to go to London to see the show! as a birthday present! Even though we have given everything we own away, he said it is a must before leaving the planet earth! Best evening ever! (next to loving each other.....) Best regards Karen

I am a great fan of this play and this was the first time I had seen it performed live. Loved David Suchet as Lady Bracknell and miss Prism was perfect. A lovely time at the vaudeville theatre

We enjoyed the show but the actors were talking very fast. If I had not known the play I would have found it difficult to follow. Also Cecily's little girl voice was irritating. The scenery sets were fantastic

A great show. A great cast. David Suchet was as god in a female role, as in every male roles he has played. No less admirations for the rest of the cast. Amazingly talented actors, passionately performing a classical text, bringing something new in Wild's play. If you want to feel good, to laugh from heart, to see something greatly and masterly made - I recomend that it is IMPORTANT to see The Importance of Being Earnest. Alexander Angelov

An old favourite played to perfection

We loved this show, an absolute ensemble piece, but the standouts were Cicely and Algernon, brilliant to watch even when they weren't the focus of the scene, i'd recommend it to anyone who wants a laugh

The Importance Of Being Suchet

Forget his wonderful TV performances, David Suchet's stage presence is gargantuan. Having seen him on stage before, I knew what to expect, but this was absolutely terrific. These period pieces are sometimes difficult to find the humour in, not so this adaptation, I didn't realise how funny this play is. The (in the main) young cast must revel in the chance to 'up their game' competing against an old 'pro' like Suchet. From the Robert Downey Jnr lookalike, Philip Cumbus to another veteran, Michelle Dotrice, the cast gelled very nicely together. A wonderful experience, especially as it was a birthday treat for my Wife and me. Many thanks to those who brought it into being and those who performed it.

Excellent - the humour is timeless

David Suchet was excellent, supporting cast not so good

The play is taken to another level of enjoyment when the actors are so superb. Suchet is of course brilliant, but the rest of the cast gave insightful and witty interpretations.

Reviewed on 25 July 2015 by Claire, Burton On Trent, United Kingdom

The show was great fun to watch and the three set designs were quite impressive and really help to set the scene. The plot was very easy to follow and it was amusing watching the story unravel on stage

Genius writing deserves top class acting- and this is what you get. An absolute joy.

This is a theatrical triumph from beginning to end. From perfect set, to fabulous costumes, and superb acting, transforming an 1895 classic into a modern gem. I had a smile on my face from beginning to end, as did my 13 year old son.Do not miss the opportunity to remind yourself of the true brilliance of a talented author. Inspiring.

A+ acting and witty script

Two out of the four people in my party don't usually enjoy the theater, but all four of us enjoyed this show immensely. The witty script and comedic skills of the actors kept us all entertained up to the last minute. A fantastic choice for our London theater event.

Super show & superb cast. Very funny. One of the best productions we have seen.

This was a very good production headlined by David suchet who was excellent and along with a very good cast made for a thoroughly enjoying evening. I have never laughed so much as I did last night

all we had hoped it would be!

We came half way around the world to see this show! Not entirely, but on discovering it was on at the same time that we were in London, I was keen to make the booking from Australia. Booking went without a hitch, and the experience of seeing on the stage faces and voices we normally only know via the screen was delightful. The placement of Oscar Wilde's wonderful play within a further storyline about an amateur dramatic society was done cleverly and only enhanced the experience. One word of advice to patrons of the Harold Pinter Theatre - brign a cushion! Backside was very sore by half time!

Reviewed on 03 October 2014 by Anonymous

This is a brilliant performance of an evergreen classic-first rate actors in a timeless piece.

Reviewed on 21 September 2014 by Anonymous

A great twist in an excellent story.

Reviewed on 01 September 2014 by Anonymous

Sme reviews were sniffy about the play within a play concept. It is true that the evening really takes off when Oscar Wild's play starts but the cast are great fun -particularly Martin Jarvis and Nigel Havers

The brilliance of the original dialogue shines through the performance. The modern "framing" adds another level of amusement and fun

I was not expecting change in the text in comparison to the Oscar While's text but pass the surprise I appreciated it.

A new twist on a well known play

Wilde fans need to be aware that this is a play within a play, so those looking for classic Wilde will be disappointed

It was a novel adaptation of a classic. But it retained all of the original witty dialogue.

DOn't know why they decided to tamper with the form of this show but it does not work. They have created a silly play within a play and added very un-Wildean slapstick. The play is not organic in the sense that say a Shakespeare is and so does not lend itself to what they have tried to do - very disappointing.