Now showing at the Victoria Palace

4.6/5 - based on 21 reviews - (Read reviews) 4.6 21 reviews Tickets from £24.00
Couples (81%) Theatregoers (95%) i
With 16 Tony nominations under its belt plus a smash hit soundtrack album and tickets as rare as hen's teeth, fought over by keen musical theatre lovers across the USA, Hamilton caused a massive stir on Broadway. If you've always wondered why there aren't more rap musicals, this'll thrill you to bits. It's a hugely popular hip-hop history show and it's already broken a suite of theatrical records.
Show info Book tickets
Hamilton tickets

Disabled theatregoers and their carers can get discount tickets. Please phone the Victoria Palace access line on 080 0988 4440. 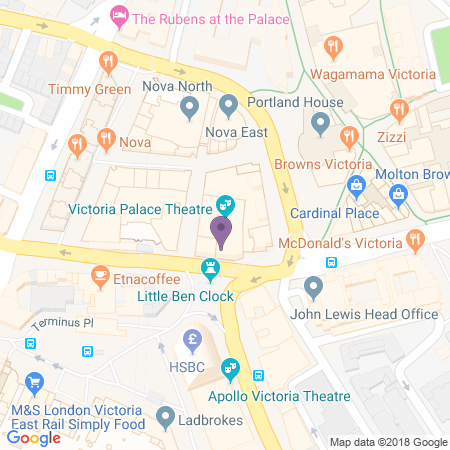 Look up and you’ll see a gorgeous golden statue of the ballet dancer, Anna Pavlova, dancing atop the Victoria Palace Theatre’s fancy stone tower. Inside the pretty pink auditorium there’s loads of lovely gold and marble and a magnificently high domed ceiling.

There has been a theatre on the site of the Victoria Palace since way back in 1832. Originally called Moy’s Music Hall, it was renamed the Royal Standard Music Hall in 1863. In 1886 the building was demolished, to be rebuilt as the Royal Standard Music Hall, with no expense spared, only to be knocked down again and reopened in 1911 by Frank Matcham, who spent a massive £12,000 building it and finally gave it the name it has today.

The auditorium, front of house and dressing rooms have recently been refurbished, but it has kept much of its original 1911 character, with a stunning grey marble foyer, golden mosaic and Sicilian marble pillars much as they were in 1911. The magnificent sliding roof, used for air conditioning, is still in place.

Apparently Anna Pavolova was highly superstitious and always studiously avoided looking at her statue. The original statue became unsafe and was taken down in 1939 to protect it from bombing raids. The current statue is a relatively new replica, dating back to 2006.

In the millennium the Victoria Palace undertook extensive building work with a bigger foyer, better loos and bigger dressing rooms.

Throughout the ‘60s variety was the name of the game at the Victoria Palace Theatre, but it hit the big time in the ‘70s when it became home to the smash hit BBC television series, The Black and White Minstrel Show. Me and My Girl ran from 1937 to 1939, with more than 1,000 performances to its name. And Liz Taylor made her London stage debut in 1982 in The Little Foxes.

Hauntings at the Victoria Palace Theatre

Victoria Palace is haunted by what’s probably the oddest ghost London’s theatreland, which hurls wigs around. The wig room is a spooky place altogether, with doors that lock and unlock all on their own as well as the famous flying wigs!

Past shows at the Victoria Palace Theatre

The Victoria Palace has staged a number of record breaking runs including modern day hits Grease, from 2002-2003, and Kiss Me Kate from 2001-2002. Buddy took the stage for six years between 1989 and ‘95 before transferring to the Novello Theatre. And Elton John’s massive smash Billy Elliot The Musical kicked off here in 2005.

You can take guide and hearing dogs into the auditorium, or staff can dog-sit if you prefer. Some shows are Audio Described. You’ll find wheelchair access in Allington Street. There are two wheelchair spaces in the stalls at P36 and M36, with seating for companions in the same row. You can also transfer to any aisle seat, with space to store as many as four wheelchairs per performance.

We’re a great destination for a wide variety of seat types and prices, with excellent availability on the full range of Victoria Palace Theatre tickets.