4.9/5 - based on 128 reviews - (Read reviews) 4.9 128 reviews Tickets from £30.00
Families (100%) Couples (81%) Theatregoers (84%) i
Disney’s Frozen has opened at the newly renovated Theatre Royal Drury Lane, and tickets for Frozen are on sale now. This is one of the most popular stories on the planet and tickets will sell out fast, there’s no doubt about it. The movie was released in 2013 and it soon became a global phenomenon, the highest-ever grossing animated movie... ever. With 37 awards under its belt, including two Academy Awards for best animated feature and best original song for Let It Go, the Musical version is an experience to remember.
Show info Book tickets
Frozen the Musical tickets

Disabled theatregoers and their carers can get discount tickets. Please phone the Drury Lane Theatre Royal access line on 020 7087 7966. 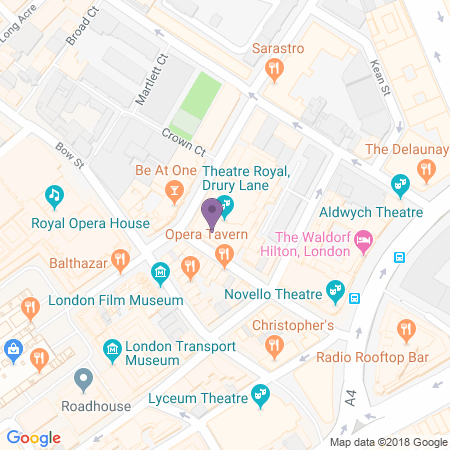 Large, pale and impressive from the outside, with beautiful columns inspired by ancient Greece, the interior of the Theatre Royal, Drury Lane is intricately and ornately decorated, with plush scarlet velvet seating for a superb traditional-style theatre experience.

The Theatre Royal Drury Lane is something really special. It’s over three centuries old, the oldest theatre site in the West End, and apparently it’s one of the most haunted buildings in the whole of London – more about that later!

Four different theatres have stood on the site. Nell Gwynne made her stage debut in 1665 and, although unharmed by the Great Fire of London in 1666, the venue eventually burned down six years later. The second theatre was built in 1674 by a Mr Thomas Killigrew and lasted an impressive 117 years. The third theatre on the site, built in 1764, was a monster that seated a remarkable 3,600 people.

The current building, which has the world’s first ever safety curtain, was built in 1812, with the distinction of having every monarch on the throne since then paying a visit. In the early days the theatre was one of just two in the capital given permission by the monarchy to stage dramas. By the mid 1800s, when the law was changed and a drama free-for-all ensued, it was a roaring success, managed by Augustus Harris, a clever man who knew exactly what the crowds wanted… and delivered it in spades.

The Theatre Royal Drury Lane is apparently the city’s most haunted building. There’s Charles Macklin, an actor who accidentally killed a fellow actor on stage during an altercation about a wig! The comedian Dan Leno haunts the place, as does the ghost of the world famous clown Joe Grimaldi. A mysterious Man in Grey has been seen often during rehearsals, in broad daylight. And a skeleton with a knife in its chest was found in a spooky concealed room in the 1870s.

Past shows at the Theatre Royal, Drury Lane

Spectacular productions have long been the theatre’s stock-in-trade, with the composers Rodgers and Hammerstein creating waves with the massive hits Oklahoma, Carousel, South Pacific and The King and I. My Fair Lady, Hello, Dolly and A Chorus Line have graced the Theatre Royal’s historic Drury Lane stage. 42nd Street filled the house for five years and Miss Saigon saw a run of more than 4,000 performances. Oliver! and The Producers were also huge hits.

The disabled entrance is in Russell Street. There are 4 spaces for wheelchairs, L1 and 35, K1 and 35, with seating for companions in the same row. There’s transfer seating to the aisle seats, and you can store your wheelchair in the Stalls storeroom. There’s also a stair lift for transfers.

We’re your top destination for a wide variety of seat types and prices, with excellent availability on the full range of Theatre Royal Drury Lane tickets.