Review: CINDERELLA at The Vaults

CINDERELLA as reimagined by Luke Barnes and the Not Too Tame theatre company is a raucous smash up of bawdy humour, nodding heavily to pantomime but then twisting, with the ending, the message to suit modern sensibilities.

The immersive setting is effectively the pub that Cinderrella works in that, her father having recently died whilst singing Karaoke, is now under the management of Cinderella's selfish stepmother and her two gormless daughters. Needless to say, Cinderella is being given a hard time by all three.

We were shown to our seats by one of those daughters, Garfunkel, (Megan Pemberton) as the cast are in character from the doors opening, interacting with the audience, serving them at the bar, a bar that is open throughout the show, generally reinforcing, from the get go, the fact that this is an immersive experience. The action is happening in real time in and amongst us, the audience, and we are welcome to participate.

This is a very effective device, but has its drawbacks. Some members of the audience can become distractingly raucous and frankly, disrespectful, of everyone else, and of any sense of there being a demarcation between them and the performance.

This happened in spades, next to us a party were simply chatting very loudly amongst themselves, following the show intermittently, further away a party were so loud the frustrated bouncers tried to quieten them down but to no avail.

This would have been less of a problem in a different venue, but the sound in the Vaults is always an issue, actors having to accept that they will at times be inaudible as trains thunder overhead. The fact remains, the only way to keep an audience engaged is to be visible, audible, and present your story. At times this simply wasn't happening, and our experience suffered for that reason.

Aside from this there were some standout performances and very funny moments. The afore mentioned “ugly” and her sister (Louise Haggerty) were very funny and perversely charismatic in their gauche attempts at sexiness. Buttons is played by the rather fit Patrick Knowles, in a shabby fur suit, whose libido and attempts at self harm compete for which is the most disturbing side of his personality.

If you like ego battering audience participation with humour that is dark and very adult, and your show served with a side of warm white wine, then this is the adult Panto for you. 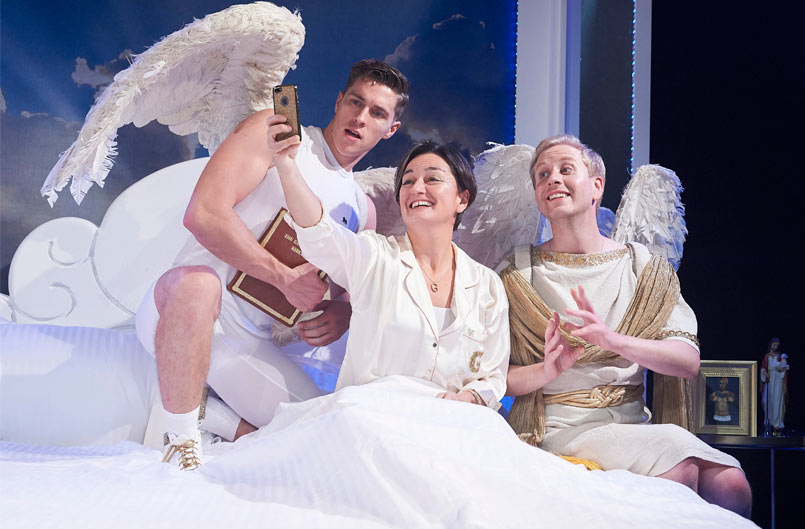 Review: AN ACT OF GOD at The Vaults Theatre, SE1 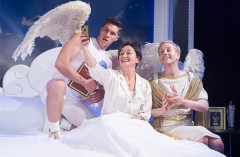 British comedian Zoe Lyons headlines this irreverent take on God’s return to the world of man, during which she discards the decidedly outdated Ten Commandments and replaces them with something more fitting for the modern era.