Review: FOR REASONS THAT REMAIN UNCLEAR at The Kings Head 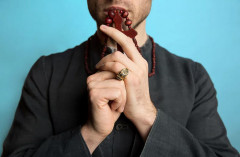 In 1968 American playwright Mart Crowley secured his place in theatre and LGBT history with his ground breaking work THE BOYS IN THE BAND, the world’s first commercially successful play with openly gay characters. In this seminal work a group of men gather for a party and drink a lot, and say viscous things to each other (as we sometimes do). This is a later play, from 1993.

Gay friendly audiences appreciated BOYS IN THE BAND but the self-hatred is so bleak that it’s equally agreeable to the homophobic who see all their prejudices confirmed. This is not to detract from Crowley’s achievement but it’s worth noting the hard drinking and self-hatred are also key to this later, much, much lesser play.

A priest accepts an invitation to the luxurious hotel bedroom of a young and beautiful Hollywood screen writer, in Rome. They’ve a lot to talk about as they're both Catholics. The older man has been obliged to give up his passion for teaching youths whilst the younger man used to be an altar boy.

Then it transpires they’re both from the same town and "Mr Hollywood" has a score to settle from his childhood. You can guess the grindingly predictable “plot twist”. If you can’t you probably haven’t seen any film or play in the past twenty years which contains a catholic priest. What would be really shocking sometime would be to see something where the priest didn’t turn out to have been a child abuser.

Crowley does go with the “It wasn’t the abuse itself that destroyed me it was the rejection and heartbreak” angle. That may have been radical in 1993, but that’s fairly common in plays about this subject these days. Elsewhere he assumes we’re interested in hearing about how it feels to be a playwright with writer's block. We’re not. It’s a rudimentary no-no of play writing to assume an audience will be interested in your process.

The production isn’t bad. Director Jessica Lazar is good at making sure things don’t get too static in the hotel bedroom, whilst designer Amanda Mascarenhas has ensured the theatre, with the audience on three sides, has never looked so chic and I had no difficulty in believing we were in five stars accommodation overlooking the Holy City.

As usual the sound design by Nicola Chang is exceptional. At first you don’t notice how she regulates the intensity of street noise outside the hotel window to help ratchet up the tension but, half way through, her chillingly ominous door locking sound is the first indication we get that this isn’t just two guys chatting about writer’s block and nice clothes.

Carrying an entire play with the audience so close is a tough gig for two actors and at first neither Simon Haines or Cory Peterson seems entirely natural or thoroughly prepared. But I gradually began to admire how much Haines as the young writer made me alternate between wanting to console and fear his character.

Programming The UK premiere of a Matt Crowley play with only 2 actors to rehearse (a third actor drops in as a waiter) makes economic and artistic sense on paper as the headliner for The Kings Head LGBT theatre festival.

The trouble is it’s not actually very good. 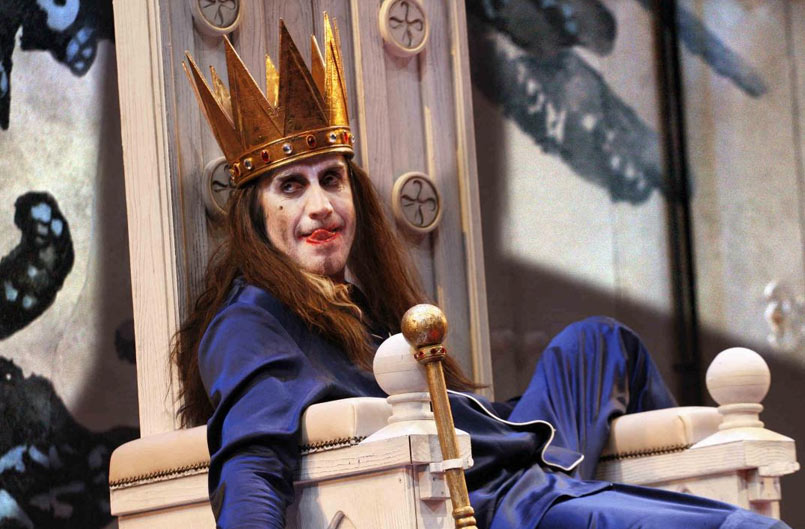 Review: EXIT THE KING at The National Theatre 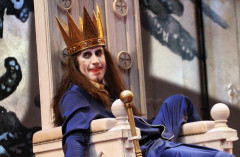 Frustrating though it definitely becomes I think this is exactly the kind of play the National Theatre should be producing amidst their recent hit and miss new writing and box-office certs like FOLLIES and AMADEUS.