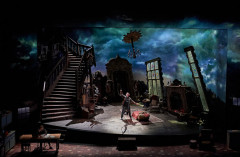 During a meteorological maelstrom, a dilapidated Manor House and its vibrant but cash-strapped owner Diana (delivered in a beautifully nuanced performance by Nancy Carroll) are unexpectedly inundated by a disparate group of shelter seekers. Can they weather both the ongoing storm and the clash of personalities which erupts from their enforced containment?

Amidst the lightning flashes and torrential downpour, the most compelling (and divisive) personality to find himself under Diana's roof, is Shaun Evans' Ted Farrier— the sort of right wing politico which one imagines Nigel Farage could have become had he been blessed with a modicum of charisma and slick good looks. Ted's oily confidence is both magnetic and self-consciously flawed (in the way that perpetual attendees of self-improvement courses tend to be). He calmly espouses thinly-veiled white supremacist platitudes, reeling-in the more susceptible characters with his doctrine of Albion purity, and shrewdly assesses Diana's lady-of-the-manor financial vulnerability and her white Anglo-Saxon credentials, determining that her seduction will improve his organisation's credibility and provide him with an historic physical base from which to operate.

Another superbly realised performance (in a play richly seamed with players' comic timing and wry observance) comes courtesy of Michele Austin's Ripley a black NHS medic who, as an unlikely hero of the piece, matter-of-factly deploys her stoic A&E common sense and organisational leadership skills in direct contrast to the male posturing, bullying and self-delusion evident all around her. Nods to religious compassion and Mother Nature ridding itself of the virus known as mankind are also introduced but never overwhelm the character-led narrative.

Moira Buffini's covid-postponed play from the National's 2020 season, is essentially a treatise on good versus evil with an omnipresent and oppressive source of disaster raging just beyond the walls. It has been blisteringly realised on the Lyttelton stage by her director sister Fiona Buffini, ably assisted by set and costume designer Lez Brotherston who has deployed an effectively dark palette which pays handsome dividends, imbuing proceedings with a sinister and creaking weight throughout. This is further enhanced with a magnificent thunderous skyline and a final inundation surprise courtesy of the combined technical wizardry of Jon Clark and Nina Dunn.

The National has served-up a magnificent malevolent maelstrom.

Review: THE DRIFTERS GIRL a the Garrick Theatre

"The Drifters are like the Yankees", we're told at the beginning of The Drifters Girl, “The line-up may change, but in the end there's only one New York Yankees”. To demonstrate this constantly changing but-never-really-changing line-up, four actors play the various incarnations of the Drifters.