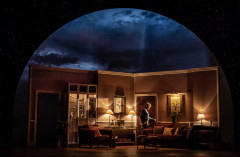 Mark Williams (Matthew Broderick) is a disappointed, middle-aged astronomy teacher but not (as we are frequently reminded) an astronomer: In other words, he is in the gutter but looking at the stars. Or, if not in the gutter, at least in an unfulfilling marriage.

He teaches at New York’s Hayden Planetarium where, in sitcom style, his class incorporates some ‘characters’, including Ian (Sid Sagar), a serial learner whose purpose in life is to dispense unwanted feedback to his teachers (providing the play’s one really memorably comic set-piece) and Mrs Pysner (Jenny Galloway) who undermines his teaching by constantly questioning, but never learning. Then, suddenly, as if sent by the universe, in pops Angela (Rosalind Eleazar), a student Nurse, single mother, and Mark’s junior by twenty years, who is looking for a class for her son to attend. They are drawn into mutual orbit by the things they have in common (um…they both have a son) and the things they don’t (she looks up and sees a universe governed by a loving, but not necessarily merciful, God; he looks up and sees physical masses whose properties are fascinating but have no bearing on our lives).

And then, oh dear, they end up snogging in her apartment. On the night I attended, there was an audible, incredulous gasp from the audience at this point. (Seriously, are we still recycling the ‘attractive-but-complicated-young-woman-falls-for-nerdy-older-man’ plot in 2019?)

Kenneth Lonergan’s play has been around for a while, having been conceived by him and Broderick as a response to the demolition of the Hayden Planetarium in 1997 and first performed off-Broadway around ten years ago. It would be interesting to see to what extent it has been re-written, cut, or tweaked since that early version, because it’s still well over three hours long and feels very much like a work in progress, or an immature work of an immensely talented writer. But Lonergan (author of the wonderful screenplay for the 2016 movie Manchester By The Sea) is so very talented, his dialogue so engagingly musical and poetic that the three-hours-plus still flies by, even if it’s punctuated by some irritated tutting.

Every performance is a jewel. Matthew Broderick unexpectedly delivers a masterclass in finely judged subtlety and restraint, portraying a strange sort of hero who manages to be incredibly selfish in his irresistible desire to please. Elizabeth McGovern, as Mark’s justifiably irritated but nevertheless compliant wife, Anne, is criminally underused in a thankless role, but precisely channels frustration and disappointment into what little text she’s given. And at the human and moral centre of the play, Rosalind Eleazar, as Angela, plumbs touching vulnerability and emotional honesty out of an implausible situation. Her subplot with terminal cancer patient Norman (the excellent Jim Norton) and his daughter, Doris (Sinead Matthews) would be a watchable evening on its own (particularly given its only tangential connection to the main action).

I left feeling frustrated. This is a play with a big heart and enormous vision, and, despite all the criticisms above, I’d watch it again for the dialogue and the performances. But, maybe, it needs a bigger telescope and a tighter focus. 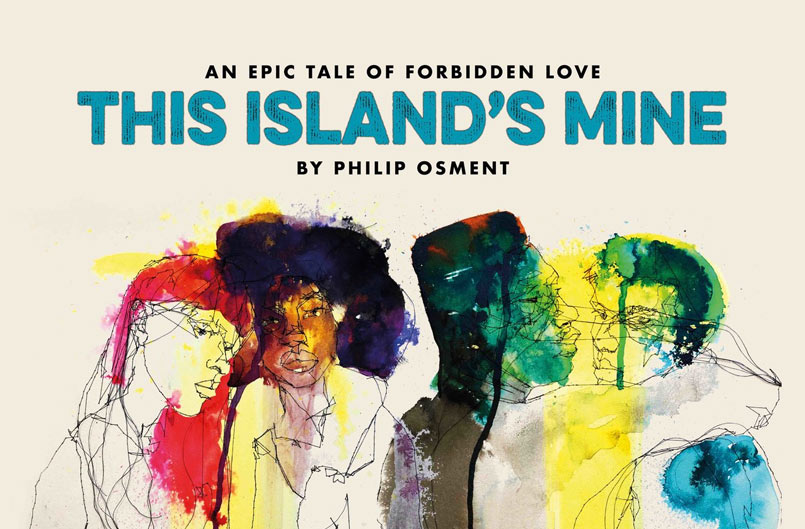 Review: THIS ISLAND’S MINE at The Kings Head Theatre 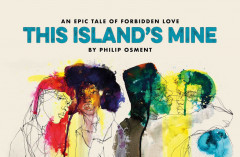 Remarkably this is the first ever revival of Philip Osment’s beautiful play, a seminal work from a now defunct theatre company called Gay Sweatshop.

These days there’s an openly gay agenda to huge swathes of UK Theatre (TV too) but back in the late 1980s the LGBT community was so marginalised that this Arts Council funded organisation was necessary to make work for and about us. (I'm very proud to say I also wrote a hit play for them some years later)