The theatrical history of the soon-to-be Sondheim Theatre 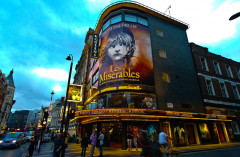 In 2015, Delfont Mackintosh Theatres owner Cameron Mackintosh proposed plans to purchase and redevelop the Ambassador’s Theatre, a redevelopment which would see the venue transformed into a flexible performance space fit to accommodate productions which needed a non-traditional stage.

The venue was also set to receive a new name: the Sondheim Theatre. The renaming was meant to both honour composer Stephen Sondheim’s achievements, and embody his taste for more unusual stagings. It was also a gesture which recognised the collaborative relationship between Sondheim and Mackintosh, who first worked together on the West End production of Side By Side By Sondheim some 43 years ago. However, following the refurbishment of the Victoria Palace Theatre in 2018, it was announced that the Ambassador’s Theatre’s facelift had been put on ice.

Nonetheless, last week, Cameron Mackintosh announced that following a large-scare refurbishment, the Queen’s Theatre will be renamed the Sondheim Theatre. Joining the likes of the Gielgud, Noel Coward and Novello Theatres, all of which boast theatrical namesakes, the Sondheim Theatre will honour the composer’s 90th Birthday, and recognise his trailblazing impact on musical theatre.

What better theatre to bear the name of one of musical theatre’s brightest stars than the Queen’s Theatre, which has housed the West End’s longest running musical Les Misérables since 2004, and boasts a long and captivating history. Audiences have been enjoying performances there since it first opened in 1907. Designed by architect W. G. R. Sprague as a twin to the Gielgud Theatre next door, the Queens Theatre opened with a production of Madeline Lucette Ryley’s comedy The Sugar Bowl, but despite receiving a slew of glowing reviews, the play ran for only 26 performances.

Following its short-lived baptismal production, a range of shows came and went, until 1940, when the Queen’s Theatre became the first London theatre to close as a result of bombing during the war. On 24 September 1940, a bomb struck the theatre directly, destroying the facade and lobby area so severely that the theatre would not reopen until almost 20 years later.

In 1959, following a £250,000 reconstruction process the theatre was restored to its former glory, and picked up where it left off, playing host to a huge range of productions including the first West End season of Laurence Olivier’s National Theatre, a cabaret set by Marlene Dietrich, and fittingly enough, the West End premiere of Sondheim’s Passion. And of course, with so many big productions under its roof, unsurprisingly, countless famous names have also trodden the boards at the Queen’s Theatre over the years, including Maggie Smith, Daniel Day Lewis and Colin Firth. More recently, a litany of musical theatre superstars have appeared in Les Miserables there too.

Following the upcoming restoration, the newly named Sondheim Theatre will continue as the home the mega musical as it enters its 35th year, no doubt ushering in a starry new era for the theatre. 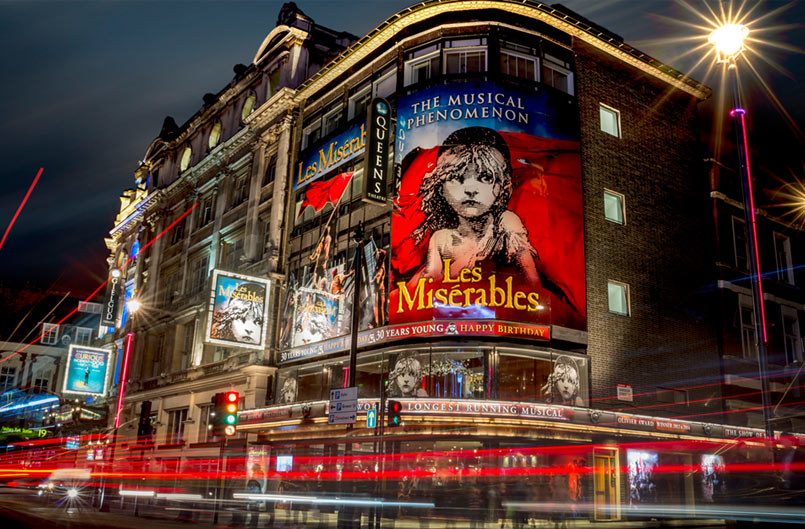 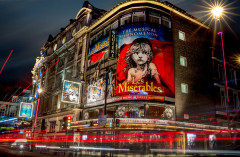 Good news; Cameron Mackintosh has announced that in honour of Stephen Sondheim’s 90th birthday next March, the Queen’s Theatre will be renamed the Sondheim Theatre. Hooray!