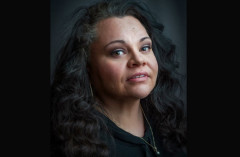 Keala Settle starred in the smash hit film, The Greatest Showman. Now she’s joining the cast of & Juliet, the award winning musical that has just extended its booking to Saturday 24th September 2022. She joins the Olivier Award winning Miriam-Teak Lee and Cassidy Janson in the Shakeapeare-inspired tale with a twist, playing the role of Nurse. This fab production has already won 3 Oliviers and 6 WhatsOnStage awards, so don’t miss it.

Keala joins the production from Tuesday 29th March 2022 through to Saturday 18th June 2022. Perhaps best known for her legendary rendition of ‘This Is Me’ in The Greatest Showman, which shot her to international fame, you can catch her on the BBC’s daytime show, Loose Women, on 19th January. Then, on 29th January, she’ll appear on TV, in BBC 1's Big Night of Musicals. So who’s involved in & Juliet?

Book your & Juliet tickets online with us and choose the best seats with our Shaftesbury Theatre seating plan. We'll send handy E-tickets to your email address for you to show on the door on the day of the performance.

About the Shaftesbury Theatre

The Shaftesbury Theatre is the final theatre to be built on the avenue of the same name, during a time when theatres were being erected all over the West End. It was completed in 1911. During the First World War it billed itself as ‘The Laughter House where you can forget the War’. Past shows at the Shaftesbury Theatre include The Pajama Game, The Illusionists – Witness the Impossible, Motown: The Musical, and Be More Chill.

A new cast has been announced for the smash hit show Wicked, one of the most successful musicals of all time. Now in its 16th year, the show has just extended its booking and the crowds just keep on coming. If you'd like to discover the untold story of the witches of Oz, the new faces on stage from Tuesday 1st February 2022 are set to make your experience even more unforgettable.