My Fair Lady lands at the London Coliseum for May 2022 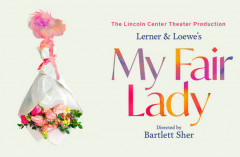 Update for My Fair Lady at the London Coliseum

It's great when the rumours turn out to be true. And it's particularly great when they're about a show with a history like this one. Not only is My Fair Lady a musical classic that has delighted audiences for more than 100 years. This particular production is a critically acclaimed show directed by the legendary Bartlett Sher, and it is the winner of a multitude of awards.

Who's involved in My Fair Lady?

When will you experience the first major West End revival of My Fair Lady for 21 years? The fun kicks off from 7th May '22, the opening night is on 18th May, and tickets go on sale from 23rd November 2021. Widely loved as a 'sublime' version of the Lerner and Lowe, Sher himself is thrilled at the news. In his words, “Getting a chance to revisit Shaw's extraordinary story of class and privilege in a new age, and especially for London audiences, is a rare and special event. And I am also thrilled to be back at the ENO and the Coliseum, a perfect space for this epic musical.”

Book your My Fair Lady tickets online with us and choose the best seats with our London Coliseum seating plan. We'll send your E-tickets to your email address – simply present them at the door on the day of the performance for a joyful classic musical to remember.

About the London Coliseum Theatre

The London Coliseum is the capital's biggest theatre, though to be the famous architect Frank Matcham's greatest achievement. Over its 100 year life it has hosted horse racing, musicals, variety, cinema and, since 1968, operas. Past shows at the London Coliseum include orchestral masterpieces by Philip Glass, John Adams, Janacek, Handel, and our very own Benjamin Britten, along with numerous operettas, oratorios and choral works.

So the rumours were true. A brand new production of Grease is due at the Dominion Theatre. The show previews from 3rd May 2022 and tickets are on sale right now. This is your chance to experience the classic teen love story that has delighted generations of us, from the original 1971 musical to the 1978 movie and a multitude of stage productions ever since. As far as spectacular musicals go, this is the one that you want!