Review: AND HERE I AM at The Arcola 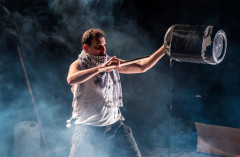 The play is performed solely by Palestinian actor Ahmed Tobasi but thanks to the brilliant production team, sound by Max Pappenheim, lighting by Andy Purves, movement by Lanre Malaolu, set design, Sarah Beaton and directed by Zoe Lafferty this one man play makes you feel like you have been transported to the West Bank complete with its heat, dust, sand and gunfire and watched a large ensemble piece performing.

Tobasi takes us on his own life story, from growing up in Jenin refugee camp, to joining the armed resistance as a naive fifteen year old, seeing friends killed and the place he called home destroyed. He was arrested and spent four years in an Israeli jail , after which it seemed like there was no prospects until he was inspired to become an actor after spending time under the wing of Juliano Mer-Khamis artistic director of The Freedom Theatre whose aim was to create a cultural revolution use art as a weapon. In 2008 Tobasi left Palestine and applied for political asylum in Norway where he went on to train as an actor, returning to The Freedom Theatre in 2013.

And Here I Am is skillfully written by Hassan Abdulrazzak who brings comic moments to some often tragic situations. But it is the passion, wit and fearless energy of Ahmed Tobasi that makes this one man show so captivating. Playing all the characters who have shaped his life and brought him to the place where he is now, centre stage, sharing with us, the audience, his own inspiring story. I believe Juliano Mer-Khamis would have been very proud.

Unfortunately 'Here I am ' only plays for six nights at The Arcola, so you may have to catch it on its UK tour, and if it comes to a town near you, then I recommend you go. You can find their touring schedule at https://www.andhereiam.co.uk/ 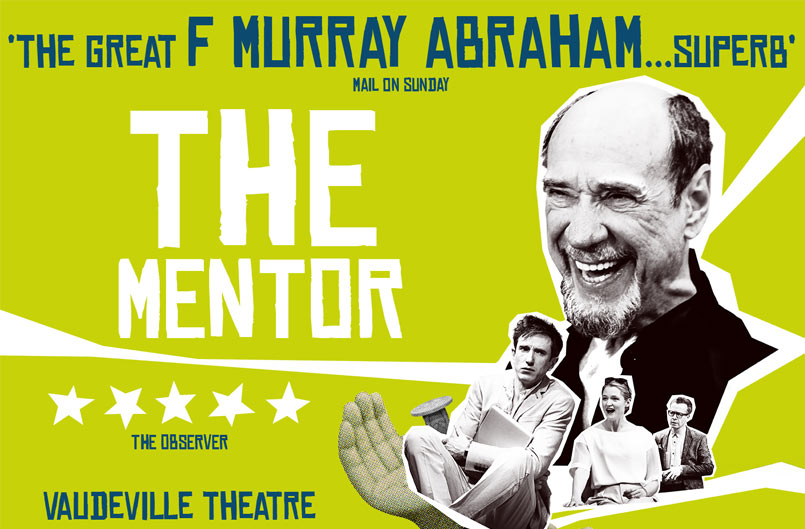 Review: THE MENTOR at the Vaudeville Theatre 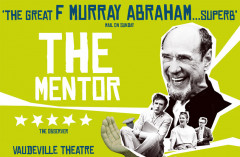 The Mentor, a 90 minute piece of theatre that's so slight it's scarcely more than a conversation piece, centres around a confrontation between two playwrights.

The first is an establishment figure celebrated for a play he wrote decades ago that's widely studied but seldom produced and the second is a newcomer recently heralded as the voice of his generation after a brief run of his expressionist play in a studio theatre.