Seven years ago, the lure of a peaceful, self-sufficient existence in the countryside, beckoned for Anna (Jasmine Hyde) and Chris (David Sturzaker). But did their lives blossom after leaving behind a world of glossy magazines and art scene criticism brimming with pseuds? 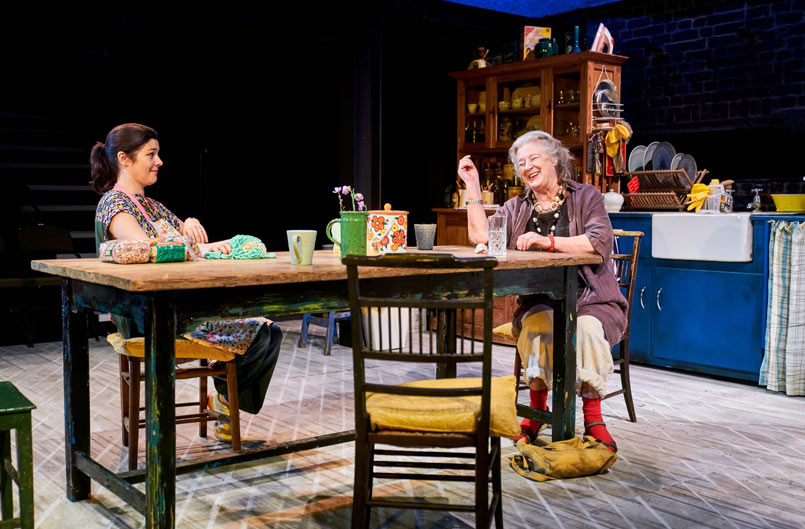 Jasmine Hyde and Maggie Steed in The Cutting Edge at the Arcola Theatre. Photo Alex Brenner.

The answer is possibly, but probably not, in writer/director Jack Shepherd’s moribund and faltering play. The catalyst he uses to attempt to breathe life into the turgid premise is a faded and forgotten artist named Elvira. Played by Maggie Steed, the larger-than-life reminiscing alcoholic arrives as a pillion passenger on a motorbike and momentarily energises the stage. But unfortunately, the characterisation bears too close a resemblance to Margaret Rutherford’s turn as Madame Arcarti (in Coward’s movie of Blithe Spirit) to offer anything but a momentary fillip. Apparently not long for this world, she is determined to take a last look at the house which served as backdrop to many an escapade in the 1930s with her youthful arty set.

The smell of a stew bubbling on the kitchen stove, gradually permeates the auditorium during the first half, which adds to the rustic feel of Louie Whitemore’s tranquil, country setting.

Also simmering, are a thinly explored plot thread about mental states in the business world, an argument between ageing biker Zak (Michael Feast) and Chris about the monetary vs aesthetic value of art, and a lonely secondary character’s romantic delusions about stoic and dependable wife Anna (James Clyde making little impression as Peter).

Ironically, for a piece titled The Cutting Edge, this feels terribly dated and is a rare flop for the Arcola which has recently been riding the crest of a wave with new and edgy theatre. The programme blurb alludes to an exploration of the tensions between creativity and capitalism, sustainability and progress - but as is so often with blurb, this merely sounds like the creator’s attempt to justify a not especially good piece of work, but hats-off to the actors for trying to find ways around the worst excesses of Shepherd’s often cumbersome phrasing when they are meant to be at their most reflective and wistful.