Review: A MIDSUMMER NIGHT’S DREAM at The Bridge Theatre

Nicholas Hytner, clearly buoyed by the success of his 2018 promenade Julius Caesar at the Bridge Theatre, has followed it this season with A Midsummer Night’s Dream - with both dazzling and disconcerting results. 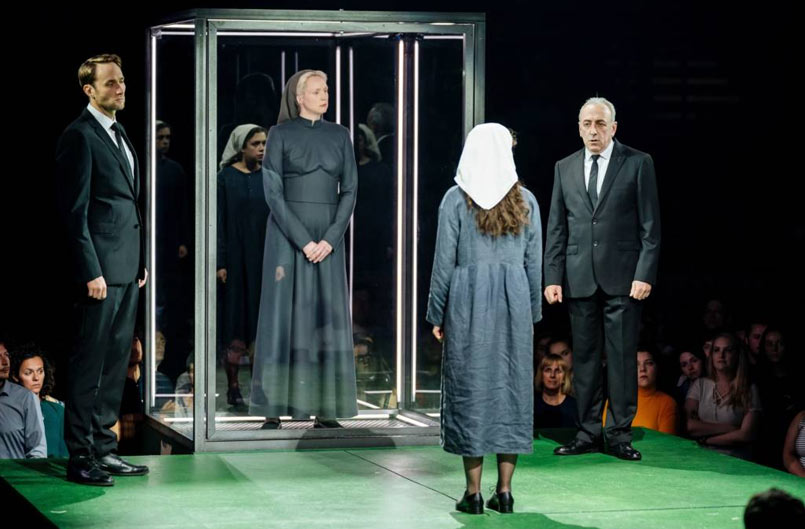 Oliver Chris, Gwendoline Christie and Kevin McMonagle in A Midsummer Night’s Dream at the Bridge Theatre. Photo by Manuel Harlan

The sheer vitality of both productions is deserving of commendation, breathing oomph and zest into the plays which, without a new angle to explore, can often assume an air of fustiness. JC’s military energy and its troupe of well-cast players with their finely tuned ear for the rhythm and cadence of the sinewy text, exuded success in every aspect a year ago. Hytner’s approach with Dream however, has spawned an entirely different beast, largely due to an exceedingly irreverent playfulness with the text - including many impromptu insertions which add levity, and gender reversals which modernise, but also serve to obfuscate some of the best known dialogue in the canon.

Gwendoline Christie - fresh from Game of Thrones - as Hippolyta, is imprisoned in a glass case at the opening - the captive Amazon, soon-to-be-wife of untrusting and possessive Theseus, played with a surprisingly successful, dead-pan drollness, by Oliver Chris. Soon they morph into the King and Queen of the Fairies respectively - yes you read that correctly - or part correctly - for she becomes Titania, yet speaks Oberon’s lines, whilst he... well you get the picture... or maybe you won’t. If you are familiar with the story and large chunks of the text, it takes quite a while for the sense to settle and in truth it doesn’t completely. Having said that, it is an engaging attempt to question stereotypes (or maybe to demonstrate the similarities shared betwixt the sexes) and as challenging ideas go, it works with remarkable success in places, but never wholly.

Puck’s characterisation when played as a cynical, queeny, Lancashire lad, (David Moorst) has some lovely edginess but in places he resorts excessively to twitches and ‘asylum scratching’ which is unnecessarily overplayed and focus-pulling, particularly in his scenes with Christie. Also, whilst Demetrius and Lysander’s (Paul Adeyefa and Kit Young) male-on-male, and Hermia and Helena’s (Isis Hainsworth and Tessa Bonham Jones) female-on-female snogging during the lovers’ argument (in the woodland mix-up sequence) are bizarrely titillating for the audience, they largely disrupt flow and pace when it is needed most. Otherwise the four give a good account of themselves.

The aerial acrobatics, are wonderfully eye-catching and add atmosphere (like tinsel at Christmas) to Bunny Christie’s constantly shifting set of rising and falling beds. Meanwhile, the end of the play offers further entertainment to our three sets of on-stage newlyweds, by presenting the sort of disparate array of contestants which could grace any Saturday night Britain’s Got Talent television show, which affords Bottom (Hammed Animashaun) and his troop of ramshackle players an opportunity to present Pyramus and Thisbee which is mocked as being immersive - thereby providing the most in joke of the evening.

All-in-all, a wonderful night of crowd pleasing entertainment, which will afford the purists some excruciating toe-curling moments. 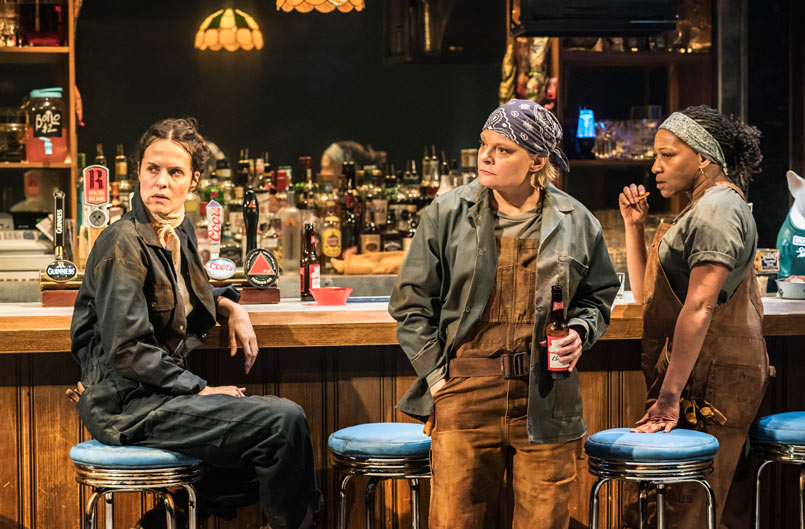 Review: SWEAT at the Gielgud Theatre

Sweat is the Pulitzer-winning play by Lynn Nottage, transferring to the Gielgud straight from the Donmar. Directed by new Bush artistic director Lynette Linton, whose rise through the London theatre scene has been almost unprecedentedly meteoric.