Review: PINTER ONE at The Harold Pinter Theatre

Pinter One is the first in a season of seven collections of Pinter’s shorter works, being presented in the theatre that’s named after him. It’s a madly ambitious, celeb-heavy project which, one imagines, must have been hugely challenging for director Jamie Lloyd to mount, and I confess to having felt some trepidation that I was going to see something under-rehearsed and thrown together.  On the evidence of Pinter One and Pinter Two (which I saw later the same day - review to follow), it looks like it might just work. 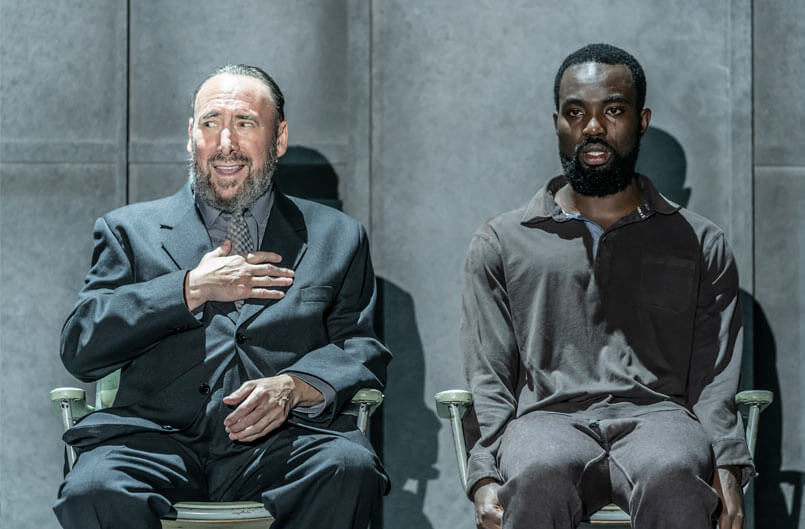 Antony Sher and Paapa Essiedu in Pinter One

This first assemblage consists of nine pieces, not all of them plays, and if only Pinter had written a couple of songs we’d have a Pinter revue (though the word “revue” would be used with a Pinteresque irony; this isn’t a piece of light-entertainment, more a guided stroll around all that is terrible and disgusting in humanity’s political and personal power structures, with a few giggles along the way). Some of the pieces are great, at least one deserves to be considered among Pinter’s masterpieces, and some are, perhaps, included more out of a desire for completeness.

After a salvo of (ironic) confetti cannon-fire, leaving anyone in the front stalls picking glittery litter from their clothing right up until the interval, we open with Press Conference, a monologue with recorded interjections, delivered by Jonjo O’Neill, as Minister for Culture in a totalitarian state, who has newly transferred from his previous position as head of the secret police. This is a world where such a transition is entirely natural, where torture and culture are sides of the same coin and it lurches repeatedly from belly-laugh funny to punch-to-the-belly nauseating. Which sets the tone for the evening.

Precisely is next, in which a pair of politicians discuss figures, ranging from 20 million to 70 million, which we assume are financial projections but turn out to be body counts. It’s a slight piece, hinging largely on the double meaning of the word ‘dead’ (deceased/precisely). The gag never really pays off, meaning the discussion of 20 million deaths is never thrown into the relief that seems to be intended, but it’s fun to watch Maggie Steed and Kate O’Flynn doing a turn as a pair of clubbable old geezers from the ministry.

The New World Order follows. Jonjo O’Neill and Paapa Essiedu, as Des and Lionel, stand in front of a bound, naked man, discussing what they are going to do to him and how great they are for doing it. He seems to be a political prisoner but, in the context of their boysy lads-in the pub discussion he is a nothing, an object that has no purpose except to be tortured by them. We see no violence, it is all in their attitude and their conversation, and is no less real for that. A special mention goes to Jonathan Glew as “man” who sits motionless, naked and vulnerable throughout, as the abuse is hurled.

Next, Mountain Language deals with the political importance of language and its use as a means of oppression. Two women are seen queuing at the prison gates to visit their loved ones and are subjected to repetitive, meaningless questioning by the guards, while their requests are ignored or denied. An elderly woman is unable to communicate with her son, a prisoner, because the local language, only language she speaks, is forbidden. “Your language is dead…. any questions?” asks the guard of the woman who is forbidden to reply. Later, the rules are changed, and the mountain language is now permitted, but she remains silent. The prisoner’s beaten, bloodied body is the most explicit and memorable image of the evening of oppressive physical violence.

The Pres And The Officer is a short, satirical sketch, discovered only recently in Pinter’s notebooks, about a president of the United States who “nukes” London because he thinks it’s the capital of France and the French are his enemies. It’s pretty inconsequential (the piece, not the nuking of Paris) but it raises the requisite number of laughs and seems remarkably prescient considering that Pinter died nine years before the start of Trump’s presidency. The role of The Pres is being played throughout the run by unannounced guest artists, and at this performance it was Jon Culshaw giving his standard Trump impression. The Pres And The Officer is bookended by two of Pinter’s poems, American Football, performed by Kate O’Flynn, and Death, performed by Maggie steed. These aren’t great pieces - Pinter was no poet - but the performers commit sufficiently to carry them, and their use as scene-change music, helping the transition of mood and dynamic between dramatic pieces, works and feels appropriate.

And then we have One For The Road. It feels wrong to describe something so harrowing as a highlight, but this is a piece that is likely to live long in the memory. Anthony Sher, as the interrogator, Nicolas, terrifies and disgusts in equal measure while maintaining the manner of a favourite uncle, periodically pausing his grotesquely deliberate and controlled verbal torture of his prisoners (Paapa Essiedu, Kate O‘Flynn and Quentin Deborne) to pour himself, and offer, “one for the road” (though nobody is going anywhere). As the whisky goes down, the mask seems to slip ever so slightly, never sufficiently to reduce the fear and revulsion, but perhaps enough to suggest that the abuser is also a victim of some kind, though one that invites no sympathy. It’s a stunning performance, almost literally.

After the interval, we have just the one remaining one-acter, Ashes To Ashes, directed by actress, director and Pinter protégé, Lia Williams. A man and a woman (Kate O’Flynn and Paapa Essiedu) who may be a couple, may have some sort of patient/therapist relationship, possibly both, riff on themes of memory and violent abuse, often referring to memories (possibly imagined) of the holocaust. It’s beautifully, thrillingly played but, by this point, after the very direct assaults on our sensibilities in the first half, Pinter’s trick of always holding explicit meaning just out of reach, making it seem to move further away the closer we get, starts to become wearing. Ashes To Ashes is never less than interesting but fails to satisfy (True Pinter devotees will disagree, I suspect, which may be the measure of a Pinter devotee).

Enjoyable isn’t the word but, for all its inconsistencies in terms of writing quality, this feels like an important collection of work, and makes an inspiring start to the season. 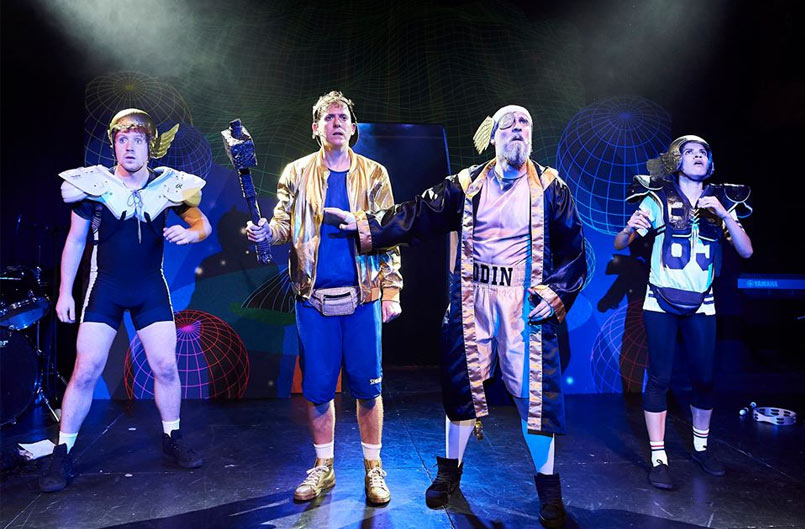 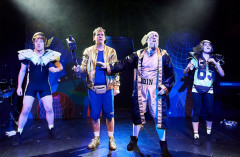 Harry Blake, writer-director-thunder-god of Thor and Loki, had better hope that the Asgardians aren’t looking down the Bifrost at the parodic antics of this production. Or perhaps not?