Review: RAIN AND ZOE SAVE THE WORLD at the Jermyn Street Theatre 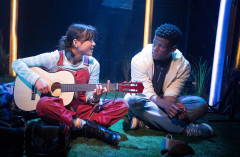 Whilst Crystal Skillman’s play may itself feel somewhat over-extended simply in trying to cover too much real and metaphysical ground, this small-scale London production has capitalised on the creative team’s considerable theatrical inventiveness and displays elements which demonstrate imaginative ingenuity and perhaps surprisingly (for the usually staid Jermyn Street venue) even some technical wizardry.

Rain and Zoe (Jordan Benjamin and Mei Henri respectively) are a couple of young disaffected neighbours who use Rain’s late father’s motor bike (one of those neat but noteworthy pieces of theatrical inventiveness) to embark on an unauthorised road trip — ostensibly to join an environmental protest at which Zoe believes her activist mother might be engaged in important work. Along the way, we discover that Rain has regular in-head conversations with his cool biker dad who is brought to life (along with several other notably successful characters including a frog and an hilarious IT geek) by Richard Holt. Zoe too has mentally transposed her missing mother onto the entirely more dependable and predictable (celestial) body the Moon, played with a suitably austere and detached aloofness by Salma Shaw complete with illuminated ukulele.

The pressure of their undertaking soon causes the young pair’s loosely-knit plans to unravel and give way to a series of fractious personal discoveries from which an awkward inter-dependence develops.

This reviewer cannot previously recall a revolve being deployed at this venue, which of itself is a considerable achievement given the extremely limited stage playing area. Projections too (whilst suffering some light bleaching on press night) were effective in adding energy to drive forward the sometimes tangential storyline. All-in-all, a real feather in the caps of the design team and technical crew.

Director Hersh Ellis has drawn-out of his performers (most especially the male cast members) the polishable and shine-worthy nuggets from the over-arching story and as an audience member you’ll certainly be charmed and get value for money at these seat prices. 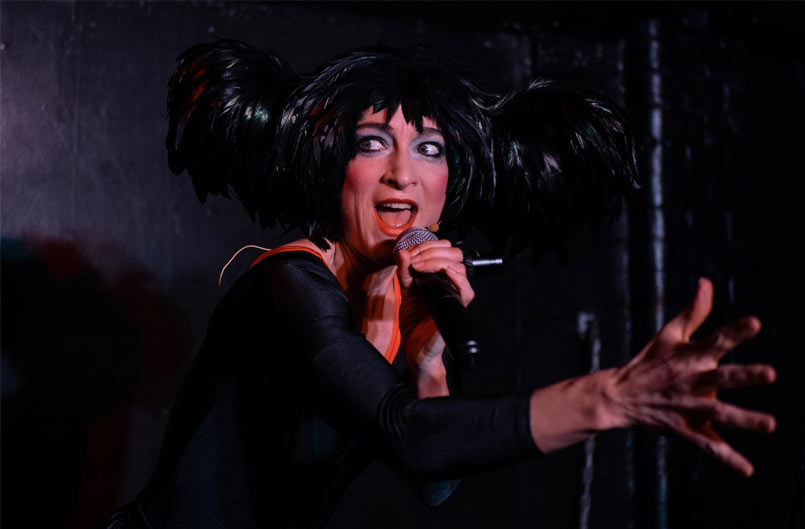 Review: AN EVENING WITHOUT KATE BUSH at the Soho Theatre

One of London’s more unusual and quirky pieces of performance theatre is currently lifting the spirits of audiences at the Soho Theatre. An Evening Without Kate Bush is unashamedly part musical tribute, but more than that, it’s a young woman’s journey reliving her obsession with the pop diva’s music, the unmistakable voice, her maverick dance style and the whole mythology which grew up around her very individual approach to the music business.