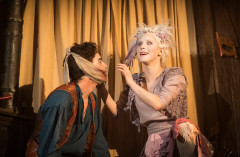 Christmas is a time for over indulgence and the West End’s latest new musical, THE GRINNING MAN, is an opportunity to relish a Grand Guignol excess of melodrama, theatricality, stage craft and emphatic dialogue; all peppered with knowing asides and drenched in a deceptively simple, original score from Tim Phillips and Marc Teitler.

It's based on a novel by Victor Hugo, who also, of course, gave the world the original plot of LES MISERABLES, the basis of the world's most successful musical.

Like Les Mis this is a story of injustice and a protracted journey to closure for the victim. On this occasion a young man, Grinpayne (engagingly played by Louis Maskell) is horrifically mutilated about the mouth as a child so that he appears to be eternally grinning, like Heath Ledger’s Joker in the darkest BATMAN films. Our hero is set on discovering the truth about how and why he was turned into something his world regards as a freak. The in-bred, vampiric, royal household hold the key!

He is both our villain and our first narrator and establishes the whole evening as a play within a play on Jon Bausor’s ingenious, creepy, dilapidated sideshow stage that throughout the evening seems to contract, expand and disgorge house of horror settings like a demonic box of tricks.

As an example of how dense the plotting is the evil clown introduces us to another man who runs a freak show in Trafalgar Square, who presents another show within that show, this one compeered by a puppet master who introduces a third layer of performance so that by the time his puppet characters perform their own puppet enactment of BEAUTY & THE BEAST we're watching a show, within a show, within a show, within a show. Every time there's anything which threatens to be touching, the writers, principally Knee High’s Carl Grose, get someone on stage to say f*ck or send up the scene, cleverly ensuring that your intellect stays engaged enough to keep up with the complex plotting.

If all of this sounds rather hard work, don’t worry, somehow it’s not and even if the many, many plot shifts leave you trailing there’s a raft of other attention grabbing elements such as puppet kids and an old wolf (from key members of the War Horse puppetry team), Les Mis. style oppressed folk wading through stage smoke, and the grinning man's pa goes out of his way to talk and sing like Colm Wilkinson’s Jean Valjean.

There is, then, something for all tastes in musical theatre. So if you hate one aspect of THE GRINNING MAN you're bound to love something else and the overall effect, engineered in precise, dizzying and brilliant detail by director Tom Morris, is an intoxicating kaleidoscope of bonkers.

It’s daring, provoking, beguiling, probably too long and deeply, darkly weird. You won’t have seen anything like it before, you won’t again and it’ll lodge itself in your psyche for ages afterwards. 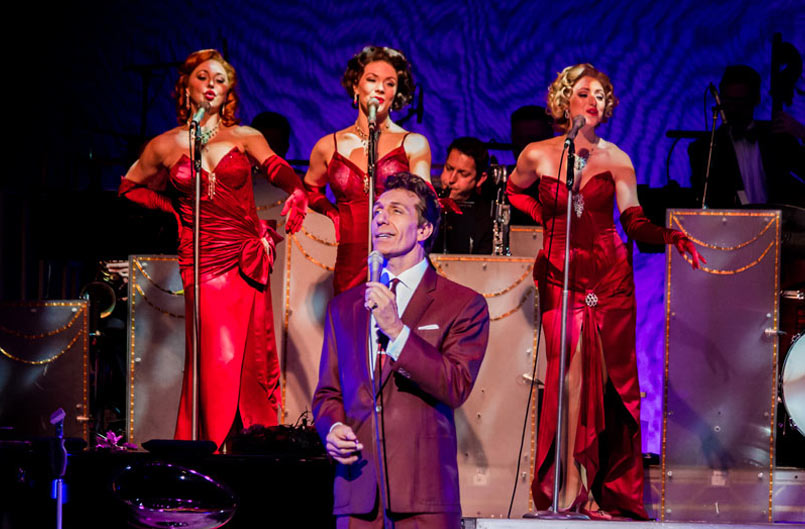 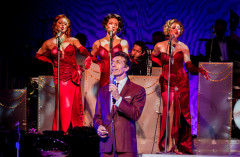 You'd be forgiven for assuming that Mitch Sebastian's devised show in which three legends - Frank Sinatra, Dean Martin and Sammy Davis Jr share their on-stage Las Vegas antics with an audience accompanied by a big band, would be a universal crowd pleaser... but in truth, it was a pretty woeful experience.