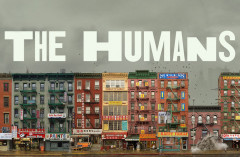 While perhaps not in the same league as these plays, this year’s Tony Award winning Best Play, THE HUMANS, is nevertheless proof that a well-written, ensemble led play can find success on Broadway. Written with warmth, humor and insight by Stephen Karam in a beautifully acted production directed by Joe Mantello, this is a thoughtful and entertaining play that will undoubtedly have a London production very soon.

Set on Thanksgiving Day, the Blake family gathers at the run down Chinatown apartment of their daughter Brigidand her boyfriend Richard. Her parents Erik and Diedre have arrived from Scranton, Pennsylvania along with Erik’s mother who is suffering from Alzheimers. Rounding out the family is their daughter Aimee, a struggling lawyer who has recently broken up with her girlfriend. Amidst the economic struggles that each member of the family is facing they set down to an afternoon of talking, laughing, bickering and supporting each other through the tricky maze that is modern America.

Both Reed Birney and Jayne Houdyshell, as the parents of the family, rightly deserve the Tony Awards they won for their performances. Rich and nuanced, they bring both humor and incredible compassion to their portrayal of a late middle-aged couple who have been trampled by the American Dream. However it is unfair to highlight Birney and Houdyeshell as this is a true ensemble piece and the subtle direction by Joe Mantello has ensured that no one sets a foot wrong.

Unfortunately I found the final ten minutes of the play to be somewhat unconvincing and at odds with the rest of the evening. This was disappointing as the weak conclusion made me doubt the impact of the rest of the evening. Nevertheless, in retrospect I can see what the author was trying to achieve and even with the jarring ending I would highly recommend that you take the opportunity to spend an evening with the Blake family. 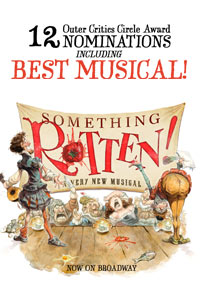 Review: SOMETHING ROTTEN at the St. James Theatre, Broadway

This is a show about two theatre incompetents, one a hard boiled cynic, the other a sweet innocent as they wrestle to compete with Shakespeare’s productions in a Monty Python-like version of Elizabethan England. The piece is a homage to and love song for musical theatre, an art form it relentlessly and lovingly pastiches throughout.