Review: THE WAR OF THE WORLDS IMMERSIVE EXPERIENCE at 56 Leadenhall Street 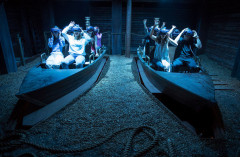 So called “immersive theatre” has become very popular in London over the past few years. Instead of taking your seat to watch events you’re usually taken, on foot, through a maze of rooms providing a series of experiences.

Pioneering companies like Punch Drunk made this fashionable about ten years ago and sometimes there’s a narrative to follow as in their MASK OF THE RED DEATH, sometimes it’s more surreal, as in the work of You Me Bum Bum Train, sometimes the format is a party or a dinner, and sometimes events are based on a theme, as in DotDotDot's award-winning production SOMNAI which explored the nature of death.

The DotDotDot team are back with a far more commercial project. They’ve teamed up with prog-rocker Jeff Wayne to create an immersive event based around his musical version of H.G. Well’s Victorian novel, THE WAR OF THE WORLDS. This was the must-have concept album of 1978, back in the day when people played vinyl LPs and cassettes over and over from start to finish, immersing themselves in the lyrics and pouring over the lavishly illustrated booklets provided (rather than downloading selected tracks, as we do now).

The story of how Martians colonised a smug and unsuspecting Victorian London and of a few brave resistance fighters, it made a big impression and has been popular ever since. Somehow it's never felt dated with its sweeping orchestral themes, screeching electric guitars and disco beets. Wayne has mined its earning potential over the years with numerous concert stagings, a theatre production and lots and lots of video games.

This current incarnation takes audiences in small groups around the many chambers of the old London Metal Exchange near Liverpool Station. In some rooms you encounter costumed actors who play characters from the story, in a state of great agitation as they lead you through a simulated escape from a Steam-Punk London under attack.

At key points you’re urged to put on virtual reality headsets through which you view 3D projections all around you. This technology allows them to sweep you up in a series of spectacular journeys through the intergalactic conflict, out to sea, up in a balloon, and through the Martians HQ and the alternative underground society we humans build to escape their clutches.

VR headsets are fairly common now-a-days as the basis of computer gaming and theme park rides but this was my first experience of wearing one and being able to view a simulated world in 360 degrees. I found it really exhilarating, it even achieves a nifty trick whereby if you look at the real people around you they’re suddenly figures in Victorian costume.

Let me first say that a great deal of work and care has been invested in giving you a truly memorable 90 minute experience. And I thoroughly recommend it as an event that you’ll be thinking and talking about for a long time to come. The whole thing may also provide a great bonding, group-experience for you and your co-workers on a night out, or as a treat with family and friends. It’s pleasingly scary in some places but there’s nothing a robust kid over 12 couldn’t cope with.

On the downside, the narrative is muddy (I gave up trying to follow it in the end) and the timings of the shocks are slightly off, often going on a few beats too long and draining their impact. The actors are also a mixed bag although I’d like to praise the expert at the Greenwich Observatory and especially the guy who played the soldier with the wounded leg that we met during our stint (7.45 on June 30th) who was exceptional. They alternate the actors so you might meet an entirely different cast.

The next generation of VR technology is going to be mind blowingly realistic, the current stuff is a little jerky – it’s still exhilarating and beautifully art directed though. I’d also have liked Wayne’s powerful score to have been pumped out at a more overwhelming volume. It sounds a little subdued; but the atmospheric soundscape is terrific.

A word of caution – the headsets are quite hard to use if you wear glasses, as I do. They advise you to keep them on underneath but this is tricky. I have varifocals and it was also quite complicated to work out which bit of my lenses to look through; some simulations appeared sharper through the close up bit of the lens, other bits were better through the distance section – but you’ll work it out.

Personally I wanted to have a very sincere, “real”, encounter and it annoyed me when the cast made little jokes that sent things up so we couldn’t forget the ridiculousness of it all. But I can quite see that this would be fun if you were with mates after a few drinks, when you’d appreciate it all feeling a little more “theme park”.

It’s expensive, with tickets ranging from £49.50 at “off-peak” times to £250 pounds for the full “VIP peak time” package. But, when ever you go, I can promise you a thrilling, unforgettable, immersive experience. 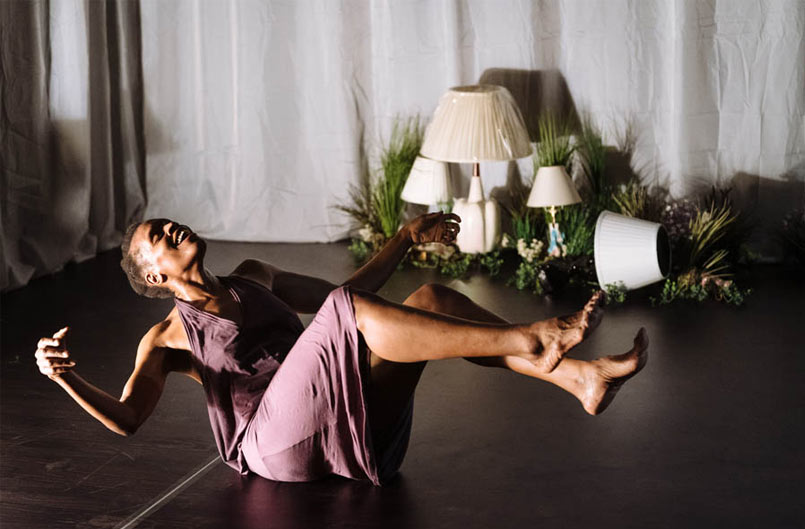 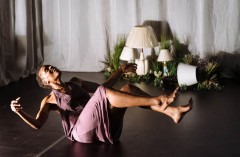 In this one hour twenty piece of performance art in the stuffy Maria studio of the Young Vic, New York’s Okwui Okpokwsili, alone on stage, is twerking as we take our seats.