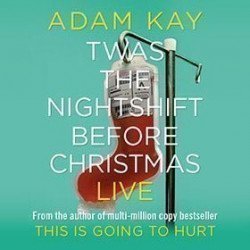 About Adam Kay - Twas the Nightshift Before Christmas Live

Make your way to the Palace theatre in London for a proper festive treat. Don't we all deserve some magic right now? Oh yes, we do. Huge thanks to to the hilarious multi-award-winning, multi-million-best-selling author of numerous magical hits including This is Going to Hurt, the talented editor of Dear NHS, and the creator of the dazzling new children's book Kay's Anatomy. Thank you Adam Kay!

This is a live performance from the award-winning live performer, Adam Kay. He has sold out multiple Edinburgh Fringe runs, filled the auditorium on many West End seasons, UK tours and international tours. His latest tour of This is Going to Hurt has been loved by more than two hundred thousand of us. That's an awful lot of laughter!

His second book, Twas the Nightshift Before Christmas, was published in October 2019, just before the world went crazy. It examines what happens behind the blue curtain in the festive season and fast became a Sunday Times number one bestseller. It sold more than half a million copies in less than three months, making the author the first to enjoy number one positions for hardback and paperback non-fiction books at the same time. That's what we call clever. And this is what we all funny. Don't miss it!

Christmas is coming. Almost one and a half million NHS staff are travelling to work. Following on from the million-selling success of This Is Going To Hurt, this is another madly funny look at what happens behind the scenes in our wonderful NHS at Christmas, fresh from Kay's diaries. Basically, this is a hilarious love letter to everyone who spends the festive season at work on the front line of our health service.

This heart-warming, ridiculously funny live show blends some of the best bits from the book with the author's fantastically amusing stand-up comedy, plus lots of amazing new content. You'll love spending the most wonderful time of the year with Adam Kay, award-winning stand-up comedy designed to delight. This one will have you giggling for days afterwards. Exactly what we need this Christmas!

What are the critics saying?

No wonder this gorgeously silly show attracts so many positive reviews. The Mail on Sunday calls it "Blissfully brilliant". The Guardian calls it "Electrifying" and arch-comedian Charlie Brooker calls it “Hilarious and heartbreaking”. The lovely Stephen Fry loves it too. In his words, "This made me very, very happy".

People aged 12 or more will roar with laughter at this stunning chunk of Theatreland silliness.