The Book of Mormon Tickets

About The Book of Mormon 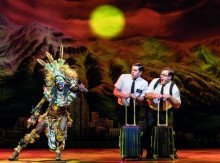 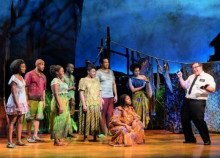 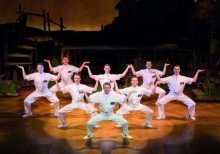 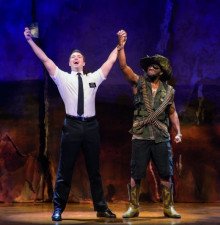 Not suitable for young children. Ages 17 and up.

The Book of Mormon description

It's hilarious, irreverent and very, very silly. The Book of Mormon was written by Trey Parker and Matt Stone, who created the popular adult cartoon series South Park, plus Robert Lopez who created the US stage hit Avenue Q. It marks Parker and Stone's Broadway debut… and what a debut it is!

The Book of Mormon - The story

In a superbly-written musical masterpiece of religious satire, the story reveals the journey of two Salt Lake City Mormons, Elder Price and Elder Cunningham, who are sent on an important mission to convert the people of Uganda to the Mormon religion. When they turn up in a small village, the natives greet them with hostility and as their beliefs and friendships are challenged, a completely hilarious musical comedy unfolds.

This isn't a musical for the faint hearted. Expect the full complement of wonderfully foul language, sexual content and crude stuff that could easily offend the easily offended! As such it's a show for grown- ups aged seventeen plus.

If you're a fan of razor-sharp scripting, beautiful sets and an excellent musical score, it's billed to be one of the hottest tickets in town. Sheer satirical magic.

The Book of Mormon theatre tickets for every budget

We offer varied seat and ticket availability with an excellent choice including premium, full price and low cost discount The Book of Mormon tickets. Perfect for every pocket.

The Book of Mormon Cast

The Book of Mormon cheap tickets

Valid Wednesday Matinee performances until 2 May 2020

The Book of Mormon reviews

Not for everyone but a bloody good laugh

Yes, this show is not for everyone but it’s absolutely brilliant. Catchy show numbers which will be in your head all day. Hasa Diga Eebowai

What an amazing show

Exceptional performance by a young but very talented cast. Great storyline well acted. A real must see. One if the best West End performances

Reviewed on 15 February 2020 by David, Forestville, United States Of America

Wow! On Every Level.

Outstanding! Material is not for the faint hearted, but if you want a laugh out loud every other beat, with incredible performers and musicians at the top of their game, Book of Mormon is a must see! Outstanding!

You already know what you are in for and you get what you went for.

Wouldnt be suitable if you dont like bad language but it isnt done in an offensive way.

For someone who hasn't heard much about the show, I was surprised in all the right ways. It was hilarious, the story was unique and brilliant and the songs were amazing. Had a wonderful time.

Laugh till you cry

What a performance. Well done cast and crew.

Loved it would defo recommend! It’s funny, inappropriate and is based on stereotypes fucking love it!!

Be prepared to laugh non stop. Loved it

Very creative, great acting but Not for those who are easily offended.

Brilliant. A must see show.

Definitely must see! The show is amazing, shocking and funny! Don’t remember when I laughed so much! Highly recommend to everyone.

I did not lime it at all its against my faith

It is written by the writers of South Park. If you like South Park you will love it. It makes fun of religion but in a very kind and clever way, it is so well written. There's a bit of swearing but not too offensive. I was laughing all the way through. The characters are brilliant!

Very amusing, great acting, fantastic singing, bizarre story. Absolutely not appropriate for children and only for the broad minded. Brilliant. Best we have seen for a long time. Thank you.

Reviewed on 06 February 2020 by Linda, Henley On Thames, United Kingdom

Hilarious! Not what you expect (in a good way)

I found it entertaining and funny.if you are easily offended dont go to this show, take it with a pinch of salt.

Loved it even u know nothing about Mormon

Out of this world, would see it again.

Good comedy for the open minded

Bit near the mark

If you are serious about you religion don't go. I loved the story and the intent buy felt it could have delivered a lot more. It as may be a bit drawn out and a bit too safe. Sometimes the names reduce the effort in the story telling.

Took a friend to see this after having been 3 years ago and loving it. My friend said the show was even better than expected, and would love to take all their friends too! Still a fab experience only second time. Would definitely go again. Hilariously crude yet with incredibly talented actors and singers.

So funny it will leave you crying with laughter, the actors and actresses were fantastic, and the songs are so catchy I still have them stuck in my head, a must see for anyone who wants a laugh

A must see, loved it

Not PC at all

Heard so much about this show and it lived up to the hype. Every theatre lover needs to watch this and I promise you will cry with laughter

Fun for the family

Loved it! Great show, as long as you’re not easily offended!

Clever and funny - thoroughly enjoyed it! High energy, entertaining, and cast gave it their all. (Can imagine if you’re very religious may not be your cup of tea, might be offended, as indicated by previous reviews)

this is the best show I’ve seen in years. Right from the start it was full of energy and fun. Everyone in the cast was fantastic and the singing, dancing and comedy timing was without fault - some choice words that may not be good for young ears!!!! Loved it. I want to go again today!!!

Brilliant show, will watch it again in the future

Outrageous loved it but not for those easily offended

So entertaining and very funny

Good songs, funny but perhaps a bit Too teenage humour for me

I liked the show and thought it was great. I would say the plot was a bit boring and sometimes the humour was a bit teenage classroom-esque so personally didn’t really find it that funny (have more sophisticated humour). But if you like that sort of thing then you will enjoy it more! I did enjoy the songs though, they were great.

The show was very funny!! Very un PC and rude but amazing to watch!!

Great production, funny but very rude, if you are prudish or don’t like bad language then this show is not for you! Went with my 24 yr old daughter & we both enjoyed it a lot.

Great show performed perfectly by a talented cast. Adult themed storyline but a great laugh from start to finish. Recommended (but not for those easily offended/shocked).

We were all crying with laughter

An amazing show! Not to miss by anoyone(who's not offended easily)

Enjoyably funny night out in London

I cried laughing – totally hilarious and so well performed.

The show was funny but we were expecting it to be a bit deeper and a bit darker given its creators. If you’re a big musicals fan then you’ll enjoy it.

I had my purse stolen before the show and didn't make it.

No holds barred, but delivered with a shocking sense of accuracy. Arrive stiff; be entertained, then leave wiser and rounded.

Excellent production with outstanding delivery. Well doñe Cast, Crew and FOH. Much more fun than you could ever imagine. Great belly laugh show.

Haven't laughed so much at a production for years. Full of joy. Vulgar, profane - it's South Park /Team America, isn't it? I've never watched either, but apparently they are hilarious. I just thought this was a hugely joyous, warm, incredibly well-acted piece of pure nonsense.

Brilliant show! Hilariously funny! Loved it and can't wait to see it again :)

Reviewed on 14 January 2020 by Jade, Stoke On Trent, United Kingdom

The greatest, and most offensive, show I've ever seen

Not only is this the funniest show I've ever seen but it's also one of the most accomplished musical performances from an ensemble that I've ever heard. Top notch acting, physical comedy, singing, music, and all of the cast are clearly enjoying this show day in and out. Go and see it, you will NOT regret it.

A fantastic night out

Outrageous, offensive, witty. I absolutely loved it. If you don't like the show, Jesus will think you're a dick.

Great acting, some fabulous singing voices, good laughs, but the swearing and bad language was a little over-used which sometimes distracted from the comedy, but overall we enjoyed the production.

Very funny show but quite rude so not for the easily offended. Clever and witty dialogue and great songs.

Fabulous, a must see!

I’ve seen this twice now and love it so much, the actors are Great, amazing singers and you just want to get up and join in! Thoroughly enjoyed it would happily go again! Can’t recommend enough. Also great seats :) would go for the upstairs ones again, I preferred them to the ones downstairs as the balcony cuts off the top of the stage.

Fantastic storytelling, must see for anybody not easily offended

This show completely exceeded our expectations and is a breath of fresh air in the world of musical theatre. Can't wait for the tour to come up north, to see again.

Best show in a while I've seen. Enjoyed every second of it, was phenomenal

Excellent Acting and Lots of Laughs

Loved the show - only issue was that it went on for a but too long in time.Loved the songs and the acting. Would recommend to my friends!

Great show, acting was brilliant. Had us laughing from start to finish really great story !

I love how politically incorrect it was. The jabs were so refreshing in the politically correct world we live in.

A must see for all adults, except for those easily offended or truly righteous!

Reviewed on 08 January 2020 by James, Oviedo, United States Of America

Reviewed on 07 January 2020 by Katherine, Ellenville, United States Of America

Best show in a long time.

Brilliantly written and wonderfully funny. Recommend this to anyone although if you find yourself easily offended..then this show may not be your cup of tea.

Laughed from beginning till end

Absolutely hilarious- a must see!

A lovely show to watch especially in the new year's eve😊 everything is good and no complain at all.

The language was dispicable and it wasn't particularly funny. Very poor storyline.

This is the best show in town for sure Hilarious, great music and dancers and amazing performers I can only recommend the Book of Mormon to anyone We are back from the show and are listening to the music

Plays Vs Musicals: The Impact Of Star Casting On Ticket Prices In The West End
17 Dec
2019

THE BOOK OF MORMON: Then and Now

With The Book Of Mormon having recently extended its West End run due to high demand, we take a look at the roots of what is now one the most successful musicals of all time. 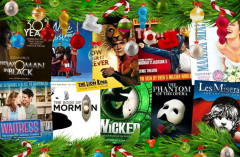 Collect your tickets from the Prince of Wales Theatre for free or get them posted to your address. 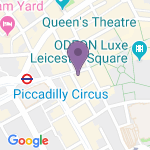 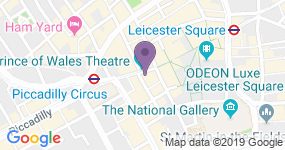