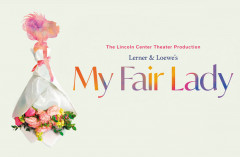 Who’s involved in My Fair Lady?

This is a ‘lavish multi award winning production’. It features a cast of 32 and an enormous band of 36 musicians from the English National Opera's award-winning orchestra. Frederick Loewe's score is nothing short of ravishing. Performances began on 7th May and the opening night is 18th May. Tickets are on sale now for a strictly limited season at the London Coliseum, running until 27th August 2022.

Buy cheap My Fair Lady tickets online on our site for great service. Pick your favourite seats with our London Coliseum seating plan. Relax, then simply show the etickets we email to you at the door on the day.

About the London Coliseum

The London Coliseum has been home to the English National Opera for more than 50 years. It primarily presents opera and ballet programmes. From 1961 to 1968 it became the ‘Coliseum Cinerama’, a popular cinema. In 1968 it reverted to live performances. Past shows at the London Coliseum include the longest running show in history at the time, the popular 1947 production of Annie Get Your Gun.