Peter Andre to star in Grease 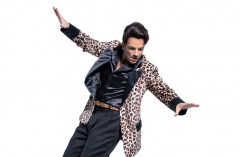 Here’s a treat for fans of Peter Andre. Andre will be playing Vince Fontaine in some performances of Grease at the Dominion Theatre. It’s his West End debut, this is a new production of the legendary musical by Jim Jacobs and Warren Casey, and the show opens on Tuesday 17th May 2022. Are you ready for a little summer loving? Will you end up hopelessly devoted to a story that has delighted millions since the early ‘70s?

GREASE originally opened in Chicago, way back in 1971. It hit Broadway in 1972 and was nominated for seven Tonys. It ran for eight years and starred the unknown actors Patrick Swayze, John Travolta and Richard Gere as Danny. Grease arrived at the Dominion Theatre in 1993, transferred to the Cambridge Theatre in 1996, and opened at the Piccadilly Theatre in 2007. Now it’s back at the Dominion. Here’s who’s involved.

Book your Grease tickets online with us and choose the best seats with our Dominion Theatre seating plan. We'll send E-tickets direct to your email address – just show them at the door on the day.

For the first few years the venue struggled to survive. Opened in 1929, it was transformed into a cinema in 1933. Rescued from demolition in 1991, these days the Dominion Theatre is a popular venue for big productions. It’s double-haunted too, by a giggling child and a brewery worker, so watch out! Past shows at the Dominion Theatre include The Bodyguard, Bat Out Of Hell, An American In Paris, and The Prince of Egypt.