Review: THE CANARY AND THE CROW at The Arcola Theatre 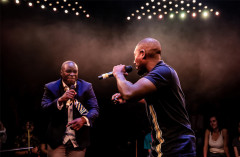 Hull-based theatre company Middle Child follows its prize garnering tour around the provinces, with a much deserved 4-week London run at the Arcola of Daniel Ward’s semi-autobiographical The Canary and the Crow in which a working class black kid is offered a place at a prestigious grammar school. Let the culture clash commence.

Combining drama with hip hop, grime and a smidgen of classical music, the energised mix produces what is nowadays termed, a ‘gig theatre show‘. This one tells of a young person’s search for acceptance in a divided, multi-cultural society where assumptions are made on all sides and where bigotry, prejudices and preconceptions are always the easiest currency to deploy, but invariably the least satisfying.

The energy created here in Studio 1 by the cast of 4 musician-actors, is certainly infectious and if you are intent on having a wild and excitable time, you’re sure to do so, as we journey with Daniel through life lessons during his juvenile years at a posh school. But there is considerably more on offer than the usual clichés and much is presented to provoke further consideration outside of the stereotypes and generalities of race and privilege.

‘Ambition without opportunity is death‘ muses our lead, in response to the interrogations of his headmaster. This scene follows a mugging incident during which his automatically assumed knowledge of the black assailant, is scrutinised and presented as a ‘choose your side’ moment by one of several out-of-touch authority figures who are required to guide him, without having the slightest comprehension of his life and it’s challenging realities.

With much humour and some blisteringly witty characterisations by his fellow cast members (Laurie Jamieson, Rachel Barnes and Nigel Taylor) the whole piece has been neatly segmented into class subjects and ends with Art, during which our embolden youth identifies the show as ‘his Art’ and challenges audience members (perhaps the critics more than any other attendees on Press Night) to dare to tell him it isn’t relevant. Quite understandably, no-one seemed remotely inclined to do so having enjoyed the spectacle which has been directed by Paul Smith and which includes music by Prez 96 and James Frewer.