Chicago and Broadway theatre audiences long ago learned the benefits of exposing themselves to the taboo subjects and aching moral dilemmas explored in Steppenwolf productions, but will Londoners embrace the opportunity with equal gusto on this occasion? 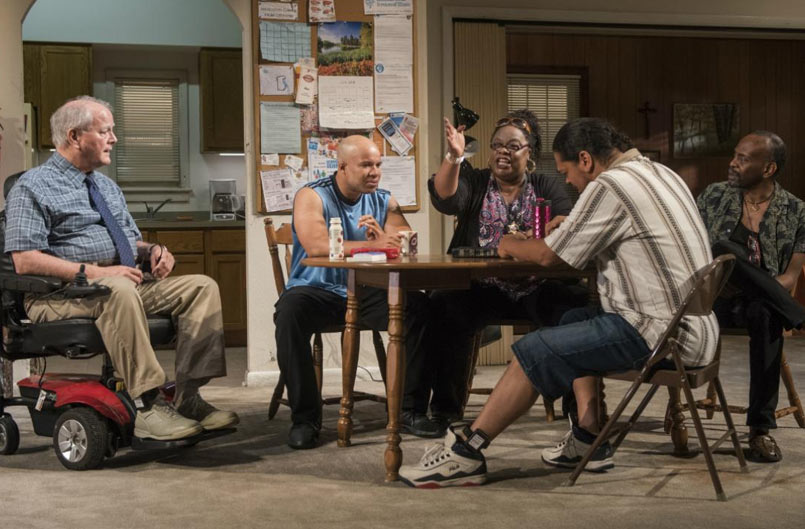 Bruce Norris’ last 7 plays have each started life by showcasing the exceptional talents of Chicago’s renowned theatrical collective. His new play “DOWNSTATE” has only just begun its run at National Theatre’s Dorfman, but is already casting quite a spell over audiences with its provocative and intimate examination of the humdrum lives of four sharers in a home for convicted paedophiles.

Many of us are still reeling from the recently screened Michael Jackson exposé “Finding Neverland”, (where unsavoury obsessing over young children breached the sanctity of our living rooms), so is a play which primarily focuses on the destroyed and wasted lives of convicted paedos too soon, too depressing and too bleak? Well perhaps surprisingly, the answer to that question is a resounding no.

Along with most in society, this reviewer feels compelled to express outrage at the obliteration of innocence by those who betray positions of trust, however he also spent a good deal of the first half of this play feeling (marvellously) conflicted by the skilful delivery of serious, painful and horribly unfunny matters, which were so subtly imbued with witty, observational humour and honesty, that it was near-impossible not to sport a permanent, understanding and reflective grin. And, the extraordinary on-stage feat was accomplished without the slightest hint of anything trivial or shallow.

Cecilia Noble - as the wise but emotionally and physically weary visiting probation officer Ivy - is especially effective in yanking everyone back into line as she demonstrates insider knowledge of her charges’ various geographic transgressions (courtesy of electronic tagging and tracking), and unravels their protestations of injustice by pointedly observing that her many ‘clients’ all seem to possess one thing in common — they consider themselves to be the victims.

On the subject of getting work, the languorous, (but always astute) sofa-sprawled figure of Dee observes with the sort of camp, bland, understatement perfected by Maggie Smith, that employment opportunities are a little limited for elderly, black, homosexual, convicted offenders.

K Todd Freeman’s absolute assuredness in the role serves as an anchor for the piece whether he is mocking, toying-with, or displaying irritation toward others. The role requires considerable stillness throughout. It also demands goading outbursts one minute and heroic defences of those he deems weak and unable to defend themselves, the next. He is in short, conflicted... which perhaps would have been a more apt title for the piece.

As with so many societal ills, the one at the heart of this thoughtful evaluation demonstrates conclusively that there are no winners where such crimes exist - everybody loses. Victims, perpetrators, the families of both and society as a whole.

Each resident has his story to tell, but it is the arrival of Andy - Tim Hopper playing the awkwardly stilted grown-up who was a childhood victim of the now wheelchair-bound former piano teacher Fred which triggers the action. Francis Guinan’s Fred is utterly convincing as a caring, slightly muddled, wouldn’t-hurt-a-fly manipulator. Their meeting and the subsequent revelations and confrontation start and end proceedings on a dramatic and unsettling note, leaving patrons to consider all they’ve seen and heard as they drift off into the night.

The intervening period requires us to question everything about our attitudes towards this most pernicious of societal afflictions: Where lays liability, culpability, responsibility? How do we allow for differences in memory, intention, truth? And what of hypocrisy, dependability and sympathy?

This last one is most revealing... specifically, should the perpetrators of such heinous acts ever be afforded sympathy, entitled to forgiveness, or does the crime itself remove all hope or rights to understanding and redemption? Judicial inconsistency in the matter seems to suggest that human beings (be they politicians, parents or prisoners), will never square a dispassionate response to such an emotional subject. Meanwhile this play attempts (largely successfully) to question the rationale of that, especially in light of the abject failure of blanket convictions and incarceration to dissuade offenders and repeat offending.

The play is remarkably easy to watch (given the harrowing subject matter) and everyone who does so will undoubtedly learn things which will challenge their views and established thinking. 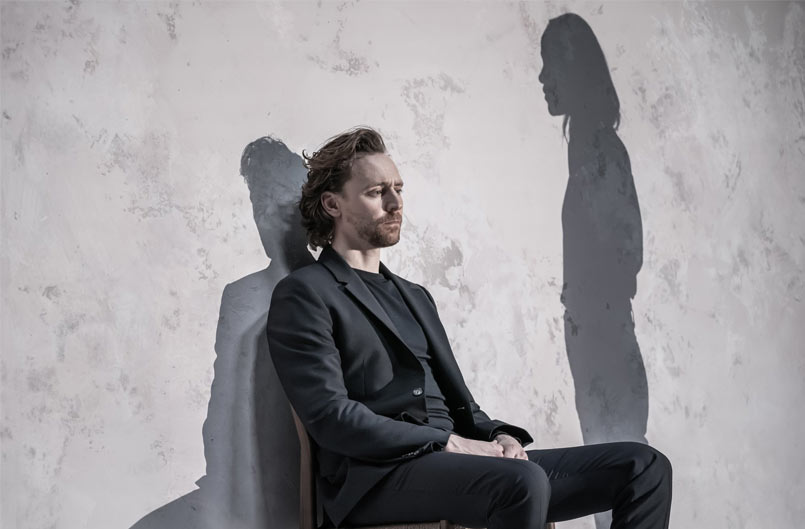