Review: INTO BATTLE at the Greenwich Theatre 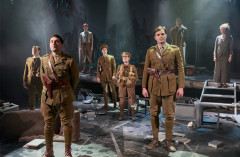 What happens when you mix a group of aristocratically entitled young men with those of a more socially conscious outlook at an esteemed and exclusive educational establishment? Into Battle recounts the trials and tribulations of the 1910 attendees of Balliol College Oxford, before and during the horrors of World War I.

The first half focuses on the pretentiously irritating Etonian upper echelons flaunting their wealth and insouciance as others scramble for serious meaning and purpose during their time at Oxford. The second takes place once war has broken-out, where due to necessity, rumbustious and irresponsible shenanigans are eschewed in favour of seriousness, responsibility and bravery.

Hugh Salmon has taken considerable trouble to research his historical real life characters, which pays dividends when layering some of the more puerile behaviour exhibited during the years of the Balliol Feud. However he misses the mark with elements of the expletive-laden dialogue which often sounds contrived and self-conscious on the lips of the largely youthful company, most of whom acquit themselves adequately but have a tendency to overplay their scenes.

The strongest element of the play, is how redolently it parallels the political turmoil of the pre-Great War period with Britain's current societal divisions — once again, whilst being led by self-professed, badly-behaved former members of the elitist Bullingdon Club. The poignancy of the ending, begs the question “Have we learned any lessons from history”?