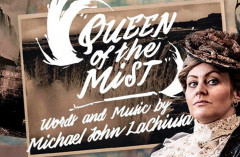 If you don’t fall into this category I’m not sure this show is going to win you over especially if you love traditional musicals that lift your spirits, break your heart, then lift your spirits again to send you singing into the night.

THE QUEEN OF THE MIST in both the NYC version and this handsome London premiere has been purposely conceived to keep you emotionally at arm’s length.

It’s about American Anna Edson Taylor who penniless and friendless, pre-WW1, took it into her head to win fame and fortune by throwing herself over Niagara Falls in a barrel. No one liked her before, and no one likes her afterwards when she lacks the necessary charisma to capitalise on the stunt on the vaudeville and lecture circuit. Then her life (and the show) fizzles out.

It’s quite hard to know what the writer/composer, and darling of cutting edge musical theatre, John LaChiusa wants us to take from the evening.

Is it a celebration of mediocrity? It steadfastly refuses to be a celebration of anything. Is it a cry for help or understanding from the little people, the forgotten footnotes of history, in the way that downbeat spiky hits like FLOYD COLLINS, SWEENEY TODD or ASSASSINS are? There’s every indication, in this case, that writer doesn’t care that we don’t care.

Creating an unlikeable musical about an unlikeable person is an interesting intellectual exercise but it doesn’t make for a fulfilling evening of theatre. The last LaChiusa show I saw on Broadway was about a father dying of cancer yet even this subject matter, in his hands, moved a packed house to indifference and kept them there. So maybe that’s his thing. It’ll be interesting to revisit his early hit HELLO AGAIN when it’s revived at the Union Theatre soon. Although this is based on the deeply cynical sex-psycho drama LA RONDE so we probably shouldn’t expect emotional engagement there either.

When I read that a young production company, Pint of Wine, were going to transfer their critically acclaimed production of QUEEN OF THE MIST from the tiny Brockley Jack Theatre to this current venue where there’s a lot more seats to sell and costs to cover, my first reaction was – “oh no! they’re going to lose a fortune!” Seeing it hasn’t made me feel any more optimistic. I doubt it’ll complete its advertised run so I’d catch it now if this is your type of thing.

But if the company do hit the rocks they can at least take comfort in the fact that they created a beautiful production.

Every creative department excel themselves. There’s a handsome set, perfect props, and particularly beautiful costumes by Tara Usher (definitely a talent to watch) with co-costume designer Lemington Ridley. The music is delivered impeccably by Musical Director Connor Fogel, the band, and sound designer Adrian Jenkins; and Bethany Gupwell’s lighting is so scrummy you could eat it.

Reading an on-line interview with young American producer Blake Klein it turns out that a drive for excellent production values and, commendably, a living wage for all on the fringe lies at the heart of his vision for the company. I think he’s going to develop into a formidable producer once he learns a little more about the pros and cons of London fringe venues, the musical theatre repertoire and that aesthetics are important but aren’t everything. Presumably he already has the prerequisite of significant finance behind him as even the initial fringe run must have lost a fortune, staged, as it was, in a venue with so few seats that sales couldn’t even have begun to cover the wage bill.

The ensemble are all handsome and/or charismatic each contributing their own special moments and in the leading role Trudi Camileri has a gorgeous voice and formidable stage presence.

Could the piece ever work? The dour and energy draining final quarter will certainly always drag it down but I can’t help thinking a more considered approach from director and lead actress could have helped.

On this occasion Dom O’Hanlon draws on his extensive experience directing amateurs in challenging venues like the Bridewell and Stockwell Playhouse to stage the piece stylishly and effectively on the Charing Cross Theatre stage which banks the audience on either side of the action played out in their midst. But had he and Camilleri dug a little deeper into the central character they might have noticed that a blow on the head during the barrel stunt is supposed to change her personality in Act 2. Unfortunately, in this un-nuanced interpretation, Anna always talks to everyone in the same way, creditor or relative, and in exactly the same way pre and post the blow on the head.

There is a much deeper story arc to uncover in future productions. Musical theatre audiences love a brassy dame with a sassy mouth putting up a fight to survive; from Momma Rose in GYPSY, to Mrs Lovett in SWEENEY TODD, to Dolly in HELLO DOLLY. Anna “feels” plenty in Act 1 and we could too. There’s no reason why we shouldn’t warm to Anna in this first part of the show if the lines were delivered with wit and panache. Then, following the bump of the head, we might sympathise when she’s no longer able to “feel” anything and be moved by the final revelations and catharsis.

Some commentators complain that the show doesn’t contain any three dimensional characters and in this production that seems to be the case but look more closely at the text and it’s blatantly not true as the role of Anna’s manager, Frank Russell, is extremely complex in his behaviour, back story and motivation. He has a love/hate relationship with Anna who he simultaneously admires, fears and seeks to exploit.

On this occasion the director has cast Will Arundell who sings it all beautifully but he’s young enough to be Anna’s grandson. Had he been a fellow middle aged grifter on the skids there’s no reason why the frisson between them and her rejection of him couldn’t pack considerably more emotional punch.

As things stand there’s much to admire here but the piece needs all the help it can get from a skilled director to emotionally engage a main-stream audience, who could potentially enjoy its elegant score if there was a story with heart to hang it on. 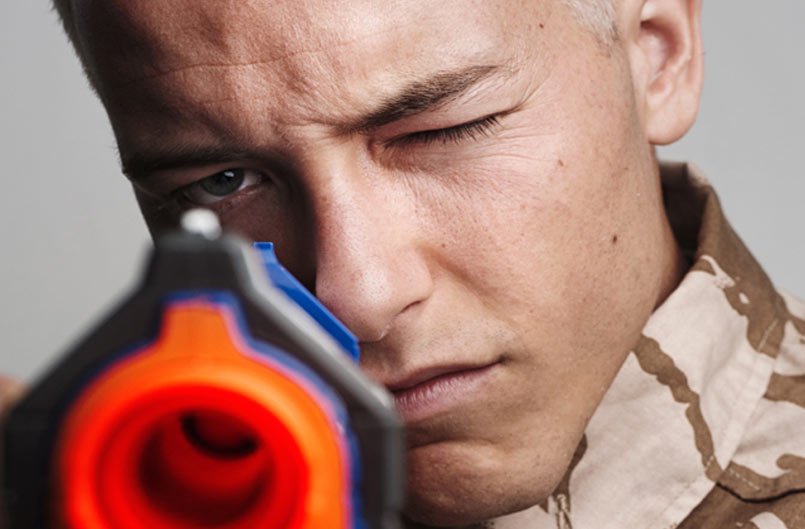 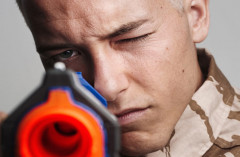 WARHEADS styles itself a punchy urban drama, based as it is, on a true story. But is there room for yet another deconstruction of PTSD and the trials and tribulations of a soldier returning from the horrors of war? In this case, the short answer is, yes (with minor reservations).