Review: THE GIRL WHO FELL at Trafalgar Studios 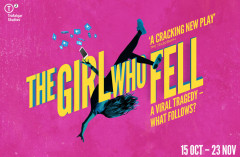 "My friends would think it was less weird if I'd run off to Syria to join ISIS", sighs 15-year-old Billie, explaining her decision to quit social media. Instead, Billie is obsessed with an app which supplies her with facts and quotes, which she's fond of reciting to those around her.

Sarah Rutherford's play The Girl Who Fell opens with Billie (played brilliantly by Rosie Day) and her twin brother Lenny (Will Fletcher) bickering after their titular friend’s funeral. The deceased Sam was Billie’s best mate and Lenny's girlfriend, and took her own life after a humiliating video of her mother cutting her hair was posted on Snapchat. Questions about who posted the video, who is to blame and if it was truly the reason for Sam's suicide are asked throughout the play, although Rutherford's piece is more of an exploration of how the people in Sam's life try to move on from her death. As well as Billie and Lenny, we meet Sam's mum Thea. Played by Claire Goose, Thea is a chaplain at the local prison, and is haunted not only by her daughter’s death but also the weight of her responsibility for it, and by the thought that she never truly knew Sam. Then there's Gil (Navin Chowdhry) an anaesthetist who Thea meets in a coffee shop and who, like all the characters in this play, is hiding information about his connection to Sam.

While primarily about suicide and grief, The Girl Who Fell also tackles themes of addiction, parenting, gender, religion and sibling rivalry. If this all sounds terrible preachy and humourless, it isn’t. All the characters provide amusing one-liners ("Why are there ladies of leisure but no gentleman of leisure?" Thea wonders. "Because it isn't alliterative. And it sounds like some sort of gigolo," replies Gil). And while Sam's suicide was partly caused by having a humiliating video shared on social media, Rutherford also includes the positive sides of the Internet age ("I looked it up on Google" shrugs Billie after explaining a complex piece of religious philosophy). This lightness of touch makes The Girl Who Fell a more fun evening than it might initially sound.

The first hour of this one-act play is stronger than the ending, which lurches into sensationalism and contains one too many plot twists. There's also prolonged scene of drug use which some audience members may find too graphic. The production value looks cheap- a cupboard doorknob fell off early in the show, leading the actors having to improvise when they couldn't open the cupboard to take out their props. This leads to the play feeling more Edinburgh Festival than West End. However, The Girl Who Fell is a thought-provoking and darkly comic evening, buoyed by interesting writing and strong performances.

The Girl Who Fell tickets 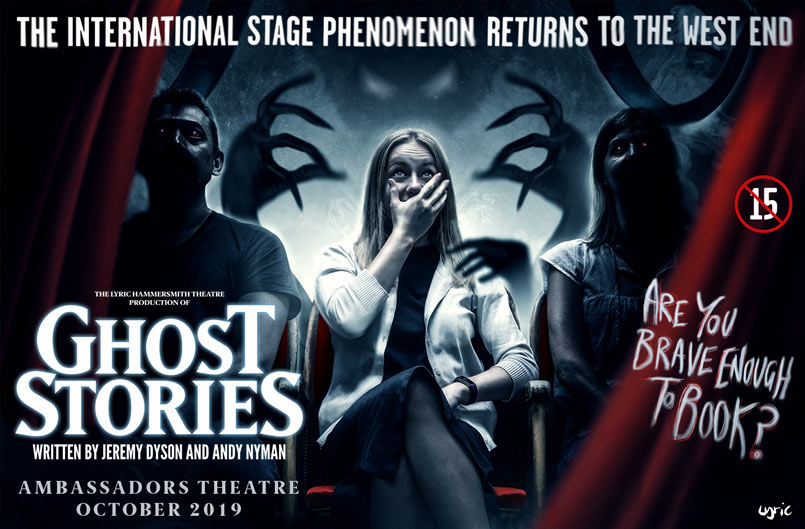 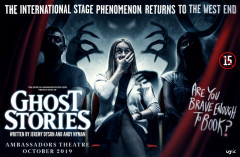 Nine years after its premiere at the Lyric Hammersmith Theatre in 2010, GHOST STORIES returns to London for the fourth time (Duke of York Theatre 2010, Arts Theatre 2014, Lyric Hammersmith Theatre again 2019). A movie was made in the midst of an International tour from Moscow to Shanghai via Lima, Sydney and Toronto. As the main character, Professor Goodman, asks the audience at the start of the show, “Why did you come to see this play?”. Why indeed, but they do.