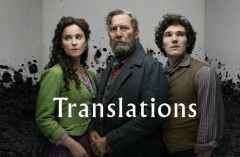 It seems sadly appropriate that, at a time when the United Kingdom has never been more disunited, the National Theatre - the theatre for all - should revive Ian Rickson’s magnificent production of a community sharing the same space who are unable to communicate with each other.

I first saw Ian Rickson's production of the Brian Friel masterpiece, Translations, last year and was immediately captivated by this brilliant play about a British Army Ordnance Survey expedition’s attempt to map, and subsequently translate into English, the Gaelic place names of an area of Donegal in 1833.

As last year, Ian Rickson’s production is beautifully judged – both the creatives and acting company are faultless – in a play where Brian Friel has written roles where each character goes on a journey which is finely mapped and portrayed, from the fun of Act 1 to the despair and desolation of Act 2.

This revival is mounted with care and with a company who are even more brilliant than the original. Fra Fre as the much loved and lovable returning son in the pay of the British; Liadán Dunlea as the haunting and haunted local girl unable to communicate – in any language; Julian Moore-Cooke as the local muscle, Doalty; Amy Molloy as the impish Bridget; and Jack Bardoe, making an impressive professional debut as one of the star-cross’d lovers, Lieutenant Yolland, are the new members of the company and there is not a weak link amongst them.

Reprising their roles are the magisterial, Ciarán Hinds; his son with dreams, Seamus O’Hare; the village bard and soak with analogies for every occasion, Dermot Crowley; and the passionate Judith Roddy, who yearns to flee to America but becomes embroiled in love.

For a play about unhappiness and setting apart, there is much laughter particularly in the scenes when those who cannot understand each other are laboriously translated into something they might comprehend. Friel’s hidden joke being that a dead language is the only language that all might comprehend.

Yet in the humour, there is real pathos at the beginning of Act 2 when the ill-matched lovers celebrate the only words they both understand - the names of local towns... And there is a real moment when the irascible, bombastic and fiercely patrician schoolmaster, Hugh, finally tells one of the lovers ‘I will teach you English...’

In a show where all the actors excel, set and costume designer, Rae Smith, provides a stunning set which is simultaneously intimate and landscape. The main playing area would comfortably fit inside the Dorfman but it is surrounded by the fields of Donegal giving a chilling moment when the British soldiers first appear in the distance through the loaming. Neil Austin lights evocatively from golden up-lights as the audience enter in Act 1 to a shabby backlight curtain as Act 2 descends with pathetic fallacy into gloom. Stephen Warbeck (music) and Ian Dickinson (sound) provide a subliminal soundscape from pleasant gentle birdsong to mournful rain with a persistent water drip into a bucket.

For all the brilliance, I do have a minor quibble. Ian Rickson ends his production with a startling director’s conceit. In itself the idea is admirable, but, such is the image that, as the eye takes precedence over the ear, we do not hear the final lines of the play. And where the author writes in his text ‘Begin to bring down the lights’, the audience are slowly presented with an image which does anything but.

But this choice is the only one that does not succeed for me. It seems to me that this production of Translations is precisely what the National Theatre was set up for - a fine play reinterpreted in a first-class manner by a magnificent team lead by a splendid director. It was good that two former cartographers of the National Theatre, Richard Pilbrow and Michael Blakemore, were in the audience to see the fruits of their labour. 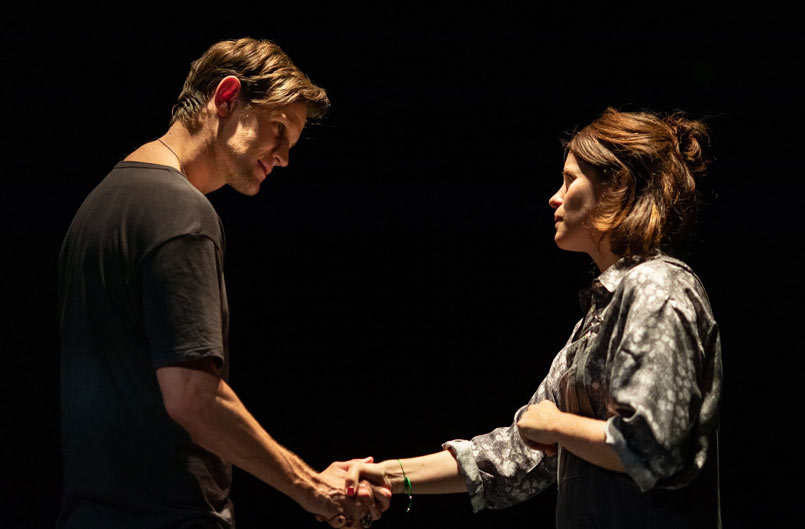 Review: LUNGS at The Old Vic 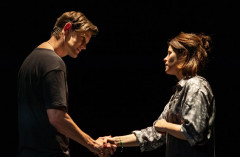 The “Ups and Downs” of life, relationships and the Earth’s health is succinctly conveyed through the naturalistic performances of Matt Smith and Claire Foy in Duncan Macmillan’s “new” play LUNGS.

MacMillan first wrote the 70 minute script for Paines Plough in 2012. For The Old Vic, he has expanded it to 90 minutes.