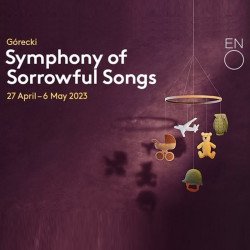 About Symphony Of Sorrowful Songs

A meaningful meditation on motherhood, love and loss, Symphony of Sorrowful Songs adapts texts in Polish taken from sources spanning the centuries, giving perspectives from both a mother having lost their child, and a child separated from their parents.

Henryk Górecki’s Symphony No. 3 (Symphony of Sorrowful Songs) broke records upon its release in 1992 and became a critical sensation, becoming the best selling contemporary work of our time and cementing itself as one of modern classical music’s finest compositions.

Russian-American conductor Lidiya Yankovskaya makes her ENO debut to conduct the full force of the ENO Orchestra in performing this transitional work in Henryk Górecki’s catalogue of works: striking a delicate balance between his roots in serialism and the emotional vulnerability of his later compositions.

Next Performances for Symphony Of Sorrowful Songs at the London Coliseum

There are no special offers available at the moment but we still have great ticket prices for Symphony Of Sorrowful Songs at the London Coliseum.