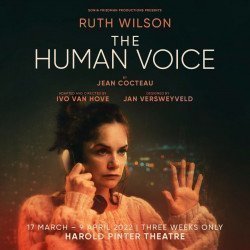 About The Human Voice 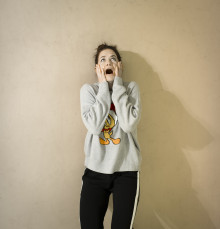 The Human Voice – With Ruth Wilson

The Human Voice is a tragic 1928 monodrama by the legendary French author Jean Cocteau. It remains one of his most popular works and as well as being turned into an opera and a vinyl record, was adapted for the big screen twice in 2014 and 2020. It's due to play a run of just 31 performances in the West End, and stars the brilliant Ruth Wilson.

Originally produced by Internationaal Theatre Amsterdam, The Human Voice has been adapted by Ivo Van Hove and designed by Jan Versweyveld. It's on at the Harold Pinter Theatre from 17th March to 9th April 2022 and is being called an 'explosive re-imagining' of Cocteau's classic exploration of love and loneliness.

What's the plot of The Human Voice?

Imagine you've been with your lover for five years, and you adore him. You've just found out he's going to marry another woman the next morning, and you're on the phone to him for the last time. This is the despairing, desperately sad story of one woman's heartbreak and subsequent dive into deep depression.

Who is The Human Voice for?

The Human Voice is suitable for people old enough to understand heartbreak, and who will remain interested throughout an adult, one-person performance.

Buy tickets for The Human Voice

Our website makes buying tickets for The Human Voice simple and enjoyable. We'll email etickets to present at the door on the day.

There are no special offers available at the moment but we still have great ticket prices for The Human Voice at the Harold Pinter Theatre.

It was like watching a school production. I’m certain Ruth Wilson - who is an amazing actor - was led by her director who, frankly, spoiled it. Don’t waste your cash or time.

If you enjoy Harold Pinter and you want to see great acting from Ruth Wilson you have got to see this performance, it was awesome.

I was not familiar with this play and was totally absorbed throughout. Ruth Wilson's performance was mesmerising and moving. The stage layout added to the mood of the piece so well. I would thoroughly recommend 'The Human Voice' to anyone who enjoys serious theatre.