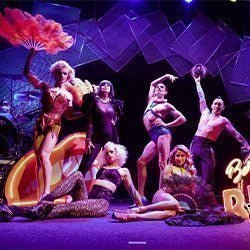 The hilarious boundary pushing phenomenon, BERNIE DIETER’S BERLIN UNDERGROUND brings gin-soaked debauchery to the Spiegeltent in the heart of the West End for a whole new season in July and August.

Nothing is off limits, no seat is safe, grab a shot of something strong and enter the darkest, funniest and most debauched club this side of Berlin!

There are no special offers available at the moment but we still have great ticket prices for Bernie Dieter's Berlin Underground at the Underbelly Festival (Cavendish Square).