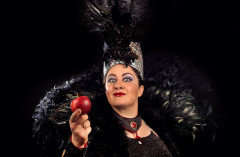 There are a number of funny and ingenious twists. Snow White, is the widow of Barry White, she misses her late husband a lot and spends her days taking care of the seven dwarves (All played by the tremendously skilled Matthew Kellett) until prince Larry Black (Amy J Payne) and his valet (Nichola Jolly) stop by. Of course their chance of happiness are threatened by the evil Queen (Andrea Tweedale) who, as usual, spends most of her time talking to her Mirror (here voiced by Simon Masterton- Smith).

The further into the show you get, the more ridiculous and absurd it becomes. Magic spells turn valets into frogs, one of the Dwarves is constantly under the influence, there is a contest between audience members, even a guest appearance from Barry White. And of course someone ends up with a cake on their head. And it all works.

One of the strongest aspects of this production is the way Savournin and Eaton incorporate famous charts hits into the story, parodying classics such as “I Want To Break Free” or “Uptown Funk” The audience not only relates to the music, but also enjoys the modern and farcical twist.

Despite Mirror, Mirror being a strong ensemble piece, it is the writer and director of the show John Savournin who shines, as he convincingly and unapologetically takes on the role of Snow White. There were plenty of moments when I wished I could have heard more of his strong, operatic voice. Matthew Kellett gives a brave and flawless portrayal of 7 (!!!) dwarves, I can only imagine how much stamina and courage it takes to perform at such a pace.

Charles Court Opera’s production of Mirror, Mirror is proof that when it comes to adult panto, you can never have too much of a good thing. 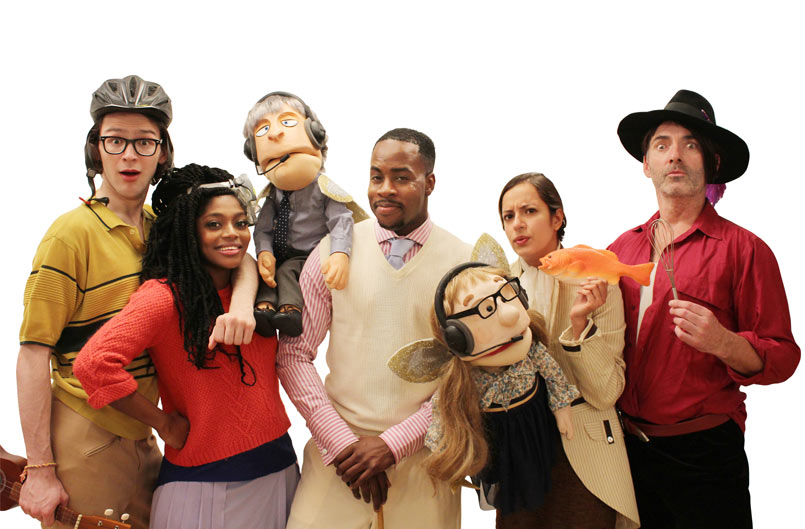 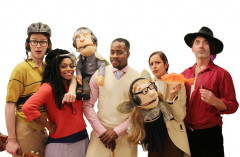 Park Theatre’s original and fresh take of the story of Rapunzel is a not to be missed, it delivers both an evening full of laughter and plenty of surprises.

Things are tough in the Kingdom of Puss Puss, as the Queen (Aretha Ayeh) and King (Rolan Bell) are trying their hardest to produce an heir to the throne. If that wasn’t enough matters get even more complicated once a con man, The Great Gazombees (Mark Cameron) along with his side-kick, Dobson (Alex Hope) start interfering with Queen’s health, plotting to rule the kingdom himself. Even the birth of Princess Rapunzel won’t stop Gazombees from getting what he wants.