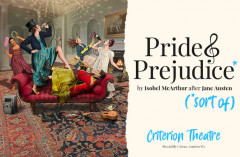 Update for Pride and Prejudice (sort of) at the Criterion Theatre

Described as ‘audacious’ and ‘unique’, Isobel McArthur’s dazzlingly good play is about to hit the West End. The Olivier and Tony Award-winning producer David Pugh is proud to announce his presentation of the Tron Theatre Glasgow, the Royal Lyceum Theatre Edinburgh, and Blood of the Young’s production, Pride & Prejudice* (*sort of). Jane Austen would, we think, be thrilled! The show opens on 2nd November 2021.

Who’s involved in Pride and Prejudice (sort of)?

This wonderfully affectionate adaptation of Austen’s classic novel is packed with popular pop classics including Every Day I Write the Book, Young Hearts Run Free, Will You Love Me Tomorrow, I Got You Babe and You’re So Vain. The action involves five supremely talented actors playing the Bennet family’s young female servants, plus all the other characters in the story, as well as singing and playing instruments. Wow!

Book your Pride and Prejudice (sort of) tickets online with us and choose the best seats with our Criterion Theatre seating plan. We'll send E-tickets to your email address for you to present at the door on the day of the performance.

The Criterion Theatre is an intimate venue with fewer than 600 seats, completed in 1873 and still featuring the original, very beautiful Victorian auditorium. Past shows at the Criterion Theatre include The 39 Steps, The Comedy About a Bank Robbery, and Amelie, which runs at the venue until Price and Prejudice (sort of) takes over.