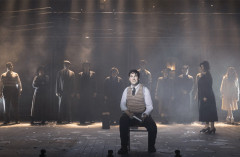 ANGELA’S ASHES The Musical premiered at the Lime Tree Theatre in Limerick in 2017. It was revived In July of this year to tour Limerick, Belfast, Dublin, Cork and now it arrives in Croydon; providing three good reasons to travel to the outer London borough.

One, is to see how surprising and remarkable the new “traditional” Musical is. Two, to see the two amazing central performances of Jacinta Whyte and Eoin Cannon and Three, to visit the newly re-opened Ashcroft Playhouse and Fairfield Hall.

It is remarkable that Adam Howell (Music and Lyrics) and Paul Hurt (Book) have written such a surprisingly enjoyable lilting and tuneful musical, based on the Pulitzer Prize winning, best selling autobiographical book by Frank McCourt.

As those who have read the book know McCourt’s childhood memories are filled with miseries and misfortunes that included the deaths of three siblings, his father’s alcoholism, his mother’s depression, their acute poverty and various home evictions.

Howell and Hurt cleverly presents the family’s miseries and misfortunes, not as a kitchen sink depressive drama but as a theatrical tragedy, that is fused with very funny Irish humour and warm Irish spirit.

The McCourt family, as recollected by Frank, revelled in songs and singing and so it is natural to have music and singing in any stage adaptations of his book. It is a welcomed breath of fresh air to see a new piece with a score that is very much in the grand tradition of the “Classic Musical”, in which the score is an integrated part of the whole. There’s been no attempt to include anachronistic “hit” “pop” songs, in order to attract some younger audience or to have “break out” pop songs to sell. Instead the score contains some beautiful songs, powerful ballads and big choral numbers. In fact the Irish flavour of the score brought Ireland into the theatre.

Eoin Cannon reprises his role as Frank for this revival. It is not surprising because he gives a natural nuanced performance, even when he is playing a child. He is most moving and uplifting in the scene where he fantasies his future and dreams to a friend (effectively accompanied by a soft choral music which heightens our emotional reaction to his fantasies). He has a great lyrical voice and sings beautifully in the duet MY PROMISE, in which Brigid Shine, who plays the consumptive girlfriend, Teresa also beautifully performs.

Jacinta Whyte’s reprises her performance as the downtrodden mother and wife. She is a powerhouse when she sings the ballads A MOTHER’S LOVE and I DON’T KNOW YOU ANYMORE and her heartbreaking lament over the death of her baby, SING RIVER SHANNON.

Marty Maguire, as Malachy, the abusive drunken father sings an emotional duet THIS CHILD OF MINE with Angela and ends Act One with a powerful duet THE DAY WILL COME with Frank.

The Opening and Closing song, ANGELA’S ASHES is most infectious, one literally leaves the theatre humming the tune. The comedy and choral songs are always tuneful and enjoyable.

The rest of the cast is very good and especially as they play multiple parts. Special mention should be made of Amanda Minihan who plays the Grandma and David O’Meara who plays Uncle Pat.

Thom Southerland directs effectively and efficiently. The characters and their situations are sharply observed and he keeps the many locations, from Brooklyn to Limerick and back to New York, flowing seamlessly from one to the other. The clever set and costumes designs of Francis O’Connor and the lighting of Sinead McKenna, helps in the process. The musical direction by David Hayes maintains the Irish flavour of the score, beautifully and lyrically, throughout the entire performance.

I strongly recommend that everyone should take that 17 minutes train ride from Victoria Station to East Croydon and an 8 minutes walk from the station to the Ashcroft Playhouse to see this surprisingly uplifting and remarkable “traditional” new Musical packed with tuneful songs powerfully and beautifully performed by the cast. 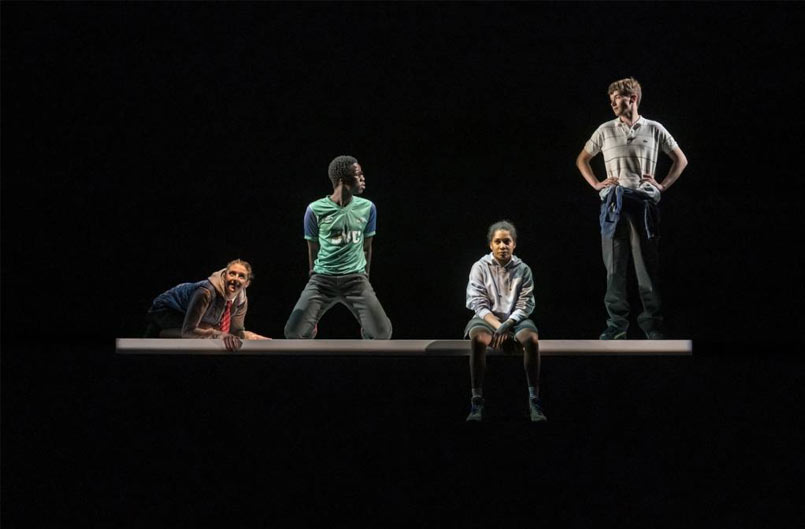 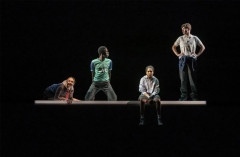 Caryl Churchill is one of Britain’s most celebrated playwrights. The power behind Churchill’s writing lies with her ability to constantly reinvent her worlds whilst exploring the most sinister and political aspects of our society. Quite frankly, Caryl Churchill is a national treasure and her new work, four plays GLASS.KILL.BLUEBEARD.IMP playing at The Royal Court, are a reminder of that.