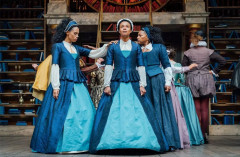 Emilia Bassano is a fascinating woman in her own right who doesn’t need to be defined by a celebrity lover, but it’s suggested that along her journey she was the secret muse of William Shakespeare.

This play gives her a voice, and it’s her own muses that form the dreamlike company of characters who tell a story of this clever woman. A gift of a story to research, Artistic Director Michelle Terry tasked the writer, Morgan Lloyd Malcom, to fictionalise the gaps in what is known of Bassano with full access to the Globe’s incomparable research resources, and the result had the audience on their feet.

Emilia Bassano was born the year Queen Elizabeth I imprisoned her cousin Mary Stuart, and by the time the infamous Queen of Scotland was executed, Emilia had already become the mistress of Henry Carey, the Elizabeth’s Lord Chamberlain. Becoming pregnant with his child, Carey arranges a marriage of convenience for Emilia to her cousin, a court musician. Navigating the challenges that Jacobean life threw at a woman, she seems more fortunate for gaining the attention of prominent women of the period including the well-connected Lady Mary Sidney and her publishing heroine, Lady Margaret Clifford.

Malcom has written a mesmerising, chronological account of this Dark Lady from wilful teen to remarkable woman. Played by three actresses, self-reflecting on three stages of her life, we celebrate her triumphs in the face of shockingly familiar adversity. Somehow director Nicole Charles and her exquisite company balance belly laughs alongside dramatic intensity to illustrate just how little times have changed for women, whilst the production itself scores one for the team.

The writing is so passionate, the delivery so heartfelt and the journey to the climax so strong that the men around me seemed as stirred as the women.

I’m proud that my own sons have not “forgot that they are of woman born” and recognise the need for this rousing, feminist work, even if I found myself looking around to gauge the discomfort of the men in the audience. There was none. The writing is so passionate, the delivery so heartfelt and the journey to the climax so strong that the men around me seemed as stirred as the women.

Perhaps this is partly the genius of all roles being played by women, even her potential plagiarist, Shakespeare himself, shrewdly captured by a witty Charity Wakefield. Emilia’s training alongside her fellow ladies for court ‘duty’ (bagging a man), the most fun until they re-emerge as the Lords on the hunt and top the hilarity in a brilliantly choreographed mating dance.

The Emilias, stunningly blended by the direction (Leah Harvey, Amanda Wilkin, and Clare Perkins), share the journey with arresting clarity. It would be difficult to pick anyone out as the thirteen women strong company share the glory so beautifully. It’s funny, stirring stuff that has captured the moment perfectly. Leaving the Globe I asked a man what he thought, and he said: “I can’t wait to come back and watch it again with my daughters because it’s so vital for them”.

Job done? Only if work like this continues to be made by talented, bold women like Emilia on an equal playing field. Although it’s a little long this exceptional new piece resonates so perfectly that I am optimistic it will be as well received by men as it was by the women on press night. Emilia’s final speech delivered like the political hip-hop rap I grew up loving in the 80’s could have tipped over into a bludgeoning campaign, but the build-up had been so delicately and intelligently worked that her rousing call to arms had me clapping till my hands stung as hard as the wonderful words.

I wish I could thank Emilia Bassano personally for having her poems published, the single act that preserved her existence, but I can’t. I can, however, thank Michelle Terry for discovering her and using her pivotal position to make sure her story has been told. 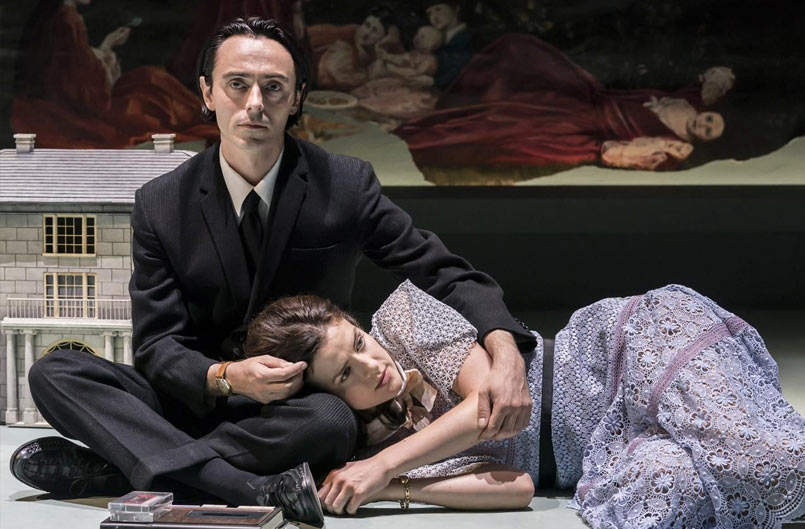 Review: ARISTOCRATS at the Donmar Warehouse 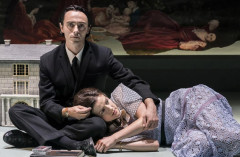 Brian Friel’s ARISTOCRATS at the Donmar Warehouse — it’s Bergman under the influence of Chekhov, set on the imaginary croquet lawn of a once grand house in Ballybeg, Ireland.