REVIEW: Ex-Batts and Broilers at the Greenwich Theatre 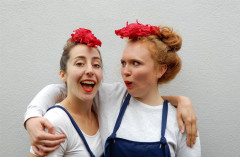 Gail and Gemma (Jesse Dupré and Sophie Taylor) are chickens. They have an important decision to make today and they need us, the audience, to help them decide.

Like all clowns, they quite like the idea of theatre and playacting, though they don’t fully understand what it is. They talk a bit like millennials, but act a bit like children. (And cluck.) They are also rescue chickens (Gemma a force-fed broiler chicken, Gail a ex-battery hen). They have been rescued by Jimmy. And it’s Jimmy’s 60th birthday, and only one of them gets to go to the party. Heartbreakingly, despite both being vibrant and (in their way) intelligent individuals, neither of them has grasped quite what that means.

Welcome to the absurdly poignant, poignantly absurd world of Ex-Batts and Broilers, a deceptively simple clown piece with some slightly cabaret-esque elements thrown in. In a brilliantly wacky touch, Gail and Gemma have inexplicable, unplaceable accents (opinions of audiences polled afterwards vary wildly between Brooklyn, Korea, Ireland, Poland, and Portugal) which appear to have morphed out of the staccato high-pitched sound of a chicken’s cluck.

You might think it would prove difficult to characterise a pair of chickens, but Sophie Taylor (eager to please, easily led) and Jesse Dupré (confident, sophisticated) make it look easy. As a devising team, Dupré and Taylor have done their research to keep their ideas specific: nice details include attention to the ways chickens keep their cages, and the fact you can hypnotise a chicken by drawing a chalk line on the floor (look it up).

As a pair onstage, their shared experience making work here as part of Haste Theatre over the last few years gives them a shared language to draw on and they play together brilliantly.

In these two characters, human characteristics combine with things that really happen to chickens: Gemma’s tribulations as a battery chicken fed many times a day are described in terms of the human feeling of indulging in brunch AND lunch in the same day (but then realising this would go on forever) while Gail’s doomed love affair with a male chicken that accidentally ended up in the battery hen coop (and is mechanically slaughtered on the spot upon discovery) is told as a a fairytale human-stye romance - and the points where the realities of the chicken-world collide with the human emotions of our chicken-characters are the real gut-punches of this super little piece, which can make you laugh for minutes on end before bringing the very real, very cruel predicament of these two little animals back into focus.

A show so ridiculous shouldn’t be so moving - but it is. No show has made me genuinely interrogate the meat / poultry industry and my own choices in relation to it as much as this has. Never does it feel as if the issue is being shoved in our faces, despite using the classic Disneyish trope of giving an animal anthropomorphic qualities and asking us to feel sympathy with its plight.

It’s hard to see how this show could be any more itself than it currently is. Not only that, but you can choose the ending! All the more incentive to go and see it twice. If you are lucky enough to be in Edinburgh at the same time as it (the final two weeks, I believe), do not miss. 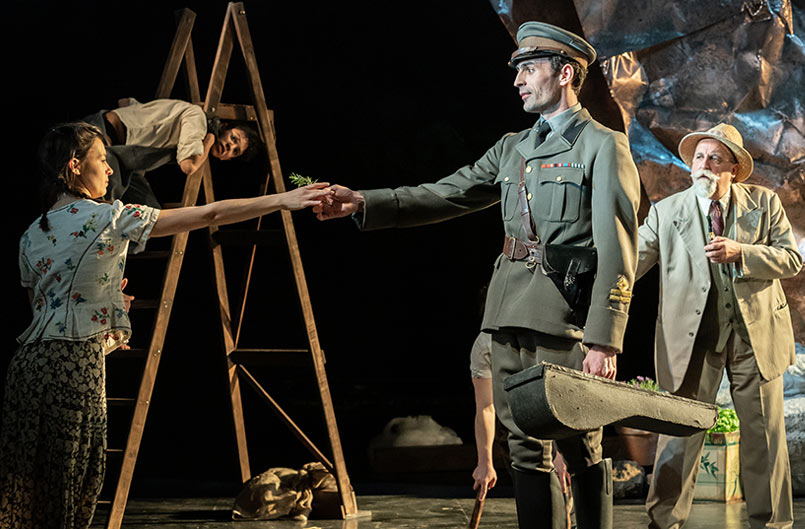