Review: MASTER HAROLD AND THE BOYS at The Lyttelton Theatre, National Theatre 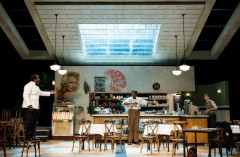 Athol Fugard’s masterly semi-autobiographical play MASTER HAROLD AND THE BOYS makes a welcomed return to London after 36 years but with a wrong production in the wrong theatre.

Fugard is renowned for his stance against the Apartheid regime in South Africa as well as his campaign for the equal rights of its black citizens. Although most of his plays encapsulate the evil and effects of Apartheid against the black people, the plights and sufferings of the poor whites in South Africa are also very present in his plays. HELLO AND GOODBYE is about two poor white siblings meeting up after the death of their mother. PEOPLE ARE LIVING THERE is about three down and out white people, living in a cheap boarding house in Johannesburg.

MASTER HAROLD AND THE BOYS is essentially about 17 year old Hally’s coming of age and his confusion of being a white caught up in the toxicity of Apartheid in Port Elizabeth, South Africa in the 1950s. The story of his mother’s black servants, Sam and Willie, who also work in his mother’s Tea Shop serves as the omnipresence of the Apartheid state. To survive their miserable subjugated and racially discriminated lives, Sam and Willie create a fantasy world of white culture into which they regularly dance. Ballroom dancing and winning the competition is one such fantasy, Willie’s life’s ambition is to win such a competition. Hally’s father is an alcoholic cripple with whom Hally has no paternal relationship. The wise and gentle Sam develops a father and son relationship with Hally. They regularly go kite flying in the racially segregated park with a bench that is only for white people to sit on. Hally is oblivious of the bench. Sam also gives fatherly advice whenever Hally needs it. Their paternal relationship is periodically shattered by Hally’s sub-conscience discriminating behaviour (“I want you to call me Master Harold from now on”), which climaxed with a shocking incident towards the end of the play. At the end as Hally leaves the Tea Shop, Sam tells Hally, “You don’t have to sit up there by yourself. You know what that bench means now. And all you have to do is stand up….and walk away from it”. Sam’s only wish was that Hally learns from the bench as he grows into manhood.

Athol Fugard’s full name is Harold Athol Lanigan Fugard and he was called Harold or Hally at school. His mother had a Tea Shop and had two black servants named Sam and Willie.

Lucian Msamati who impressed us with his sensational performance of Salieri in the National Theatre’s recent production of AMADEUS continues to impress us as Sam. Hammed Animashaun who entertained us with his comic timings as Bottom in the Bridge Theatre’s production of A MIDSUMMER NIGHT’S DREAM continues to entertain us here with his dancing and comic turns as Willie. Newcomer to the stage, Anson Boon who plays Hally lists a few TV and Film credits with no stage performances in his biography. Perhaps that is why his delivery of some of the Play’s most important lines are lost and not projected or articulated clearly.

The open big set does not convey the modest Tea Room of Hally’s mother in Port Elizabeth, instead it looks and feels more like a Lyon’s Restaurant in London. Roy Alexander Weise’s attempt to play up the comedy with an over the top fantasy sequence at the end, instead of focusing on the confused and angst ridden childhood of Hally is misguided and misses the mark.

The brilliance of Fugard’s writing is lost in the vastness of the Lyttelton Theatre auditorium. It would have been much better being presented in the intimacy of the Dorfman Theatre. 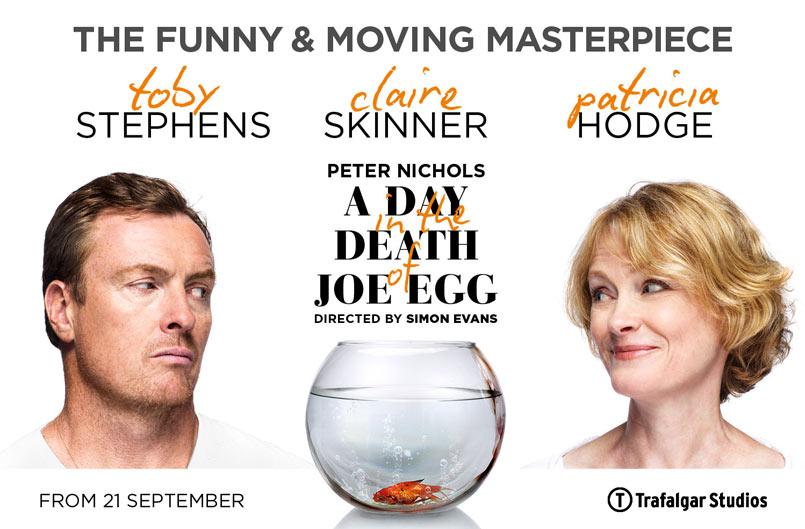 Review: A DAY IN THE DEATH OF JOE EGG at Trafalgar Studios 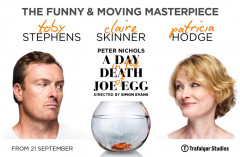 Peter Nichols’ 1967 play A DAY IN THE DEATH OF JOE EGG is typical of the writer’s mocking irreverence towards taboo subjects. His death aged 92 just a few weeks ago, makes this revival of his groundbreaking play, now running at Trafalgar Studios, all the more poignant.