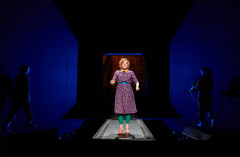 As its title alludes, SHOE LADY is a play which revolves around a woman (Viv, played by Katherine Parkinson) who is impacted by footwear — most especially, the loss of one half of a pair of shoes. Unfortunately, it is her only pair of shoes, so the loss assumes a profound significance and the results, whilst often comic, are ultimately calamitous.

Who’d have imagined that such a premise would make for an entertaining piece of theatre? The answer to that question is playwright E V Crowe, who has a solid back catalogue of work at Royal Court, and Vicky Featherstone the theatre’s artistic director. But it could just as easily have been Kafka or Becket, for there are distinct overtones of daily drudgery — “Damp laundry! That terrible smell. The smell of nowhere to put a tumble dryer.” — being disrupted by a single mundane occurrence, which results in a chaotic and seemingly insurmountable downward spiral.

Parkinson plays Viv as a befuddled, stoic dreamer, who has struggled (like many women after pregnancy), to cling onto her individuality and simple vanities, which have been overwhelmed and sacrificed to the inexhaustible needs of an infant.

The piece is technically demanding, requiring a number of dramatic lighting states and the continual placement (by stage crew) of props onto a treadmill which faces towards the audience. With her bloodied foot, Viv lives-out her human descent enabling easy comparison with a homeless woman in one particular scene and another where it leads to the loss of her job.

Some strong work from Sasha Milavic Davies as movement director, adds demonstrably to the overall rhythm of the play, though perhaps the song at the end was a step too far in a piece which presents some interesting ideas, which need further fine-tuning. 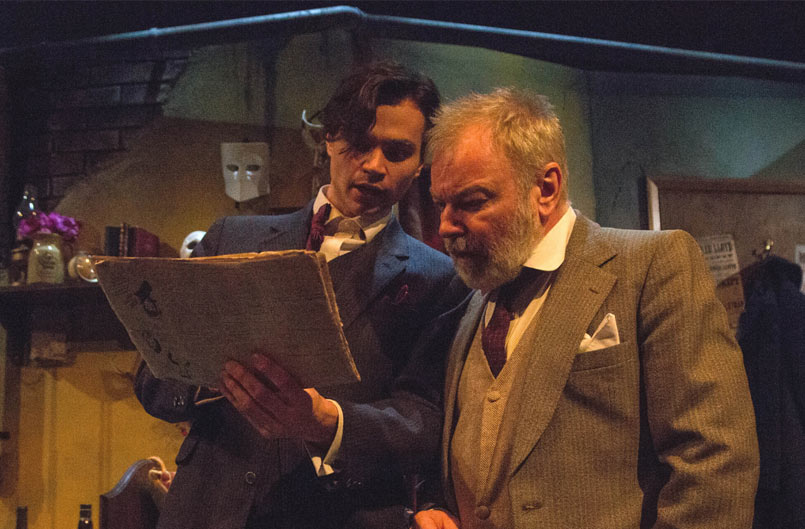 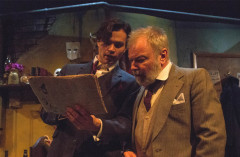 Come and enjoy a fun night out in 1930’s London. CORPSE! by Gerald Moon is a classic comedy of mistaken identity, brought back to life by director Clive Brill.