Review: THE GLASS PIANO at The Coronet Theatre 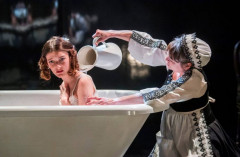 Is it a fairy story? Is it a panto? Is it a children's show? Is it a comedy? Is it a philosophical exploration of language, freedom, rule of law, social hierarchies and the power of love? No, it's The Glass Piano receiving its World premiere at the wonderful Coronet Theatre in Notting Hill.

It's also all of the above, and more, which makes for a slightly confusing evening. Based on a true-ish story of Princess Alexandra Amelie of Bavaria who believed she had swallowed a glass piano and was therefore very delicate and untouchable, playwright Alix Sobler creates a whirlwind of allegory and metaphor, touching on many serious subjects without quite landing a punch on any of them.

Alexandra's father, King Ludwig, is an aspiring poet who feels he has the words inside him but just "can't get them out" and instead produces silly couplets about himself, much to the exasperation of his daughter and the maid, Galstina. Hiring a handsome philologist, Lucien Bonaparte, nephew of the dictator Napoleon, to help him out, love blossoms, as in all good fairy stories, and by the end of Act 1, Alexandra's glass piano is no longer an impediment to being touched, King Ludwig and Galstina acknowledge their long-simmering desire for each other and it all culminates in a rather lovely moment of dance.

Notices in the theatre promised us snowflakes that there would be gunshots, so after the interval I was rather hoping for some Grimm-style nastiness to take us to a dark side. But not really. Incidents happen and, of course, it doesn't end well but there's no real exploration of the themes Sobler has tempted us with. What's with the feral children Lucien is interested in? What about the former Queen who also seems to have gone, ummm, feral? How much symbolic weight can a feather duster take? Why is the maid, Galstina, played for laughs? The only word Lucien's Kaspar Hauser-like protégé, a child brought up in silence, with no human contact, in a cellar, can utter is "why?". I felt the same.

There are some very good things in this production, nonetheless. One of the main reasons I wanted to see this is that the music, beautifully played live (with a little help from pre-recorded moments) on the piano by Elizabeth Rossiter, is a new score by Gabriel Prokofiev and it's very fine, especially the extended 'concerto' that Alexandra believes she is composing inside her. The spiky rhythms and the unexpected chromaticism reminded me of Bartok, and, yes (sorry Gabriel), his grandfather, Sergei.

The set design and lighting by Declan Randall is very atmospheric and beautiful, particularly in this extraordinary space. And the actors. Grace Molony as Alexandra is a delight. She makes us believe that she had swallowed the piano and had to be very careful in her movement, she invests the Princess with a humanity not immediately apparent in her character, one almost, but not quite, sympathises with her predicament. The King, forcefully portrayed by Timothy Walker is played for laughs and gets them. His pomposity and his desperate need for playing by the rules he has set himself, otherwise he is nothing, is well done. I could have done with less gurning and silly voices from Suzan Sylvester's Galstina but that may well have come from the director, Max Key. She provides the panto element I mentioned before and it was probably a thankless task for her to create a believable, rounded character given the material. She is often endearing though and formidable when she needs to be. Somewhere in the middle of all that is Laurence Ubong Williams as the hapless suitor Lucien. Enthusiastic and dashing, he is the one character in the play that keeps his head while all around, the others lose theirs. 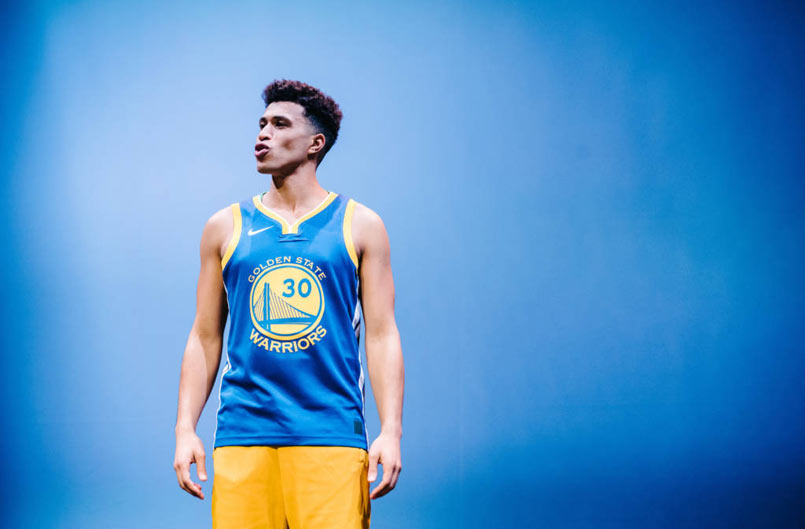 Review: THE HALF GOD OF RAINFALL at The Kiln Theatre

This modern, Nigerian/American Fairy story is well worth telling but some powerful acting from Rakie Ayola (Modupe) and a brilliant sound design by Tanuja Amarasuriya is not enough to save poor dialogue, distracting lighting, and lack of creativity in staging. With such a small cast, Inua Ellams new play may be more suitable to a literary audience than a theatrical one.

Kwami Odoom as Demi in The Half God of Rainfall. Photo by Dan Tsantilis.