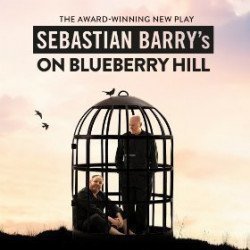 About On Blueberry Hill

On Blueberry Hill – Fresh from the Laureate of Irish Fiction

You're in the market for a piece of pure theatre class? You fancy experiencing an award winning play? This one comes fresh from the pen of the Laureate of Irish Fiction Sebastian Barry, and it has proved a sell-out so far. Welcome to On Blueberry Hill, which completely sold out in New York and Dublin, a show starring the marvellous Niall Buggy and David Ganly, the actors who delighted audiences at the play's world premiere at the Dublin Theatre Festival and on tour. That's what we call exciting news!

What's the story? You can expect a beautifully crafted two-hander of a play delving deep into the themes of murder, forgiveness, survival and love, all of which play out from the depths of the human heart, a place that can be a prison. As such this is a fascinating exploration of unintended consequences.

Meet PJ, played by David Ganly, and Christy, played by Niall Buggy. They're best mates but they are also long-term rivals, so it's fascinating to see how they manage to share cell space together, share their lives behind bars. As they reminisce about freedom's extraordinary highs and lows they embark on a journey that reveals the story of how they came to be locked up together.

Niall Buggy and David Ganly have been at the heart of this play since the beginning, kicking off in New York and Dublin before heading for the West End. Niall Buggy is an Olivier Award-winning Irish actor who has delighted us with roles in TV, on stage and in movies, particularly well know for a masterful role in Brian Friel’s Uncle Vanya and an Olivier award winning role in Dead Funny. David Ganly is a theatreland regular who has wowed audiences with his work in Connor McPherson’s Girl From the North Country. If you also loved Chicago, Shakespeare in Love, The Wizard of Oz and Translations, you'll recognise his talent.

The playwright Sebastian Barry is possibly Ireland’s greatest writer, the current Laureate of Irish Fiction and a multi-award winner of the Kerry Group Irish Fiction Prize, the Costa Book of the Year award, the Irish Book Awards Best Novel and many more. He also writes books – magical books – and his novels A Long Long Way and The Secret Scripture have both been shortlisted for the MAN Booker Prize. Direction comes from Jim Culleton, Fishamble's brilliant Artistic Director and another Oliver winner, this time for his contributions to Silent by Pat Kinevane.

Who is this show for? On Blueberry Hill is about life in prison so probably works best for people aged 12 or more.

On Blueberry Hill was a great night's entertainment at the Trafalgar Studios. It is a beautifully written work by Sebastian Barry. It is a two handed play, with magnificent acting, in a very intimate setting, well directed, and very atmospheric. The audience loved it on last Saturday night (7/3/2020) and gave it a standing ovation with prolonged applause. The language is strong throughout,if you're offended by the F & C words, please take note. The duration is 1 hour and 40 minutes, with no interval. It is a very powerful drama, but there's also great warmth and humour. We would be delighted to recommend the whole experience, and thought that it was super value for money. It truly deserves our 5 star review. 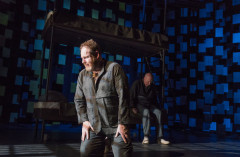 Review: ON BLUEBERRY HILL at The Trafalgar Studios
all shows