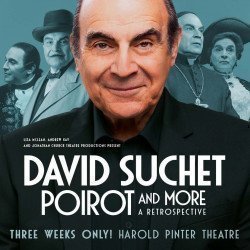 About David Suchet - Poirot and More: a Retrospective

The character Hercule Poirot originally turned up in Agatha Christie's first published novel, The Mysterious Affair at Styles, published in 1920. The eccentric Belgian crime-solver’s character was played to perfection on TV by David Suchet, but it’s far from being the only string in his bow. Welcome to an intimate retrospective show that reveals the actor’s many brilliant roles and best-loved performances, straight from the horse’s mouth. It’s fabulous!

What's the plot of Poirot and More: a Retrospective?

The Harold Pinter Theatre is your venue for this very special performance. Following a successful tour of Australia and New Zealand through early 2020, followed by a comprehensive UK tour, the show takes an affectionate look at David Suchet’s extraordinary career. You’ll share the inside story behind some of his most popular performances, revealing the actor in a freshly-intimate light.

The interviewer is Geoffrey Wansell, the respected journalist, broadcaster, biographer and co-author of Poirot and Me. He joins David on stage for a stimulating, revealing conversation with the actor behind the detective and the many amazing characters he has portrayed over a glittering fifty year career.

David Suchet played Poirot for 25 years. Every performance was a diamond. Other than that he has thrilled us with roles in many Shakespeare plays as well as plays by Oscar Wilde, Edward Albee and Jonathan Miller. He’s widely celebrated for many iconic roles including Lady Bracknell, Cardinal Benelli, Joe Keller and Gregory Solomon. 13 years in the Royal Shakespeare Company, an Emmy winner and nominated for seven Oscars, he was knighted in 2020 for services to drama and charity. This is his story.

Who is Poirot and More for?

David Suchet – Poirot and More is recommended for people who will be entertained by and interested in the career of one of the country’s best-loved performers.

Buy tickets for Poirot and More: a Retrospective

Our website makes buying tickets for David Suchet - Poirot and More: a Retrospective, really simple. We'll email your tickets direct to you – all you do is present them at the door on the day.

Next Performances for David Suchet - Poirot and More: a Retrospective at the Harold Pinter Theatre

This was a most interesting and enthralling show. Poirot and more - I was riveted for almost 3 hours -highly recommended.