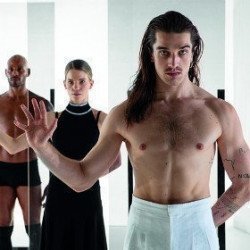 Created for Rambert by Wayne McGregor in 2002, PreSentient marked the arrival of a major new talent with its perfect match between McGregor’s angular movement and the lyrical phrasing of Steve Reich’s music.

Hofesh Shechter had a similar impact in 2007 with In Your Rooms, blending the personal and political with heart-stopping intensity.

Completing the triple bill is a new work by Marion Motin, whose hip hop influenced style is best known through her work for Christine and the Queens.