Now showing at the Ambassadors Theatre

4.3/5 - based on 3 reviews - (Read reviews) 4.3 3 reviews Tickets from £30.00
David Harbour and Bill Pullman are back! They’re returning to London’s theatreland to star in the world première of Theresa Rebeck's darkly amusing new play. Mad House. The action is beautifully directed by Moritz von Stuelpnagel and the fun takes to the stage at the Ambassadors Theatre in June 2022, for a strictly limited run.
Show info Book tickets
Mad House tickets

Disabled theatregoers and their carers can get discount tickets. Please phone the Ambassadors Theatre access line on 020 7395 5405. 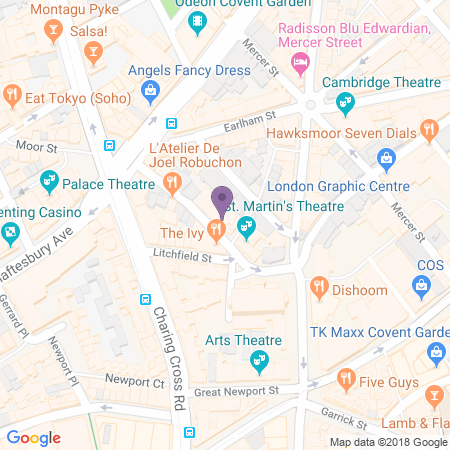 Built as a small, intimate theatre, the Ambassadors,is an attractive little place that’s partially underground, with plain white walls, fancy engravings and the occasional painted coat of arms. The overall effect is understated and unusually elegant.

Designed by W G R Sprague, who designed a host of beautiful West End Theatres including St Martin's and Covent Garden’s Aldwych Theatre, the Ambassadors Theatre was built by Kingerlee and Sons of Oxford. Like many theatres of the time, the Ambassadors was built as one of a matching pair, St Martin’ being its other half. Their construction was interrupted by the First World War, and the Ambassadors, finished after the war, is significantly less high than St Martin’s.

The Ambassadors Theatre opened with a show called Panthea in 1913, a disaster of a show that closed after just fifteen nights. But its luck soon improved. Originally intended as avenue for small, intimate shows and revues, a few years later it was lucky enough to house debuts by massive stars Ivor Novello, who played in Deburau in 1921, and Vivien Leigh of Gone With the Wind silver screen fame. Most famously, it was the venue where Agatha Christie’s The Mousatrap, the West End’s longest running show, played for twenty two years before transferring next door to St Martin’s in March 1974.

Since The Mousetrap transferred, the Ambassadors Theatre has staged all sorts of interesting and exciting hits including the Royal Shakespeare Company’s version of Les Liaisons Dangereuses, with Alan Rickman, as well as smash hits Sweeney Todd and The Vagina Monologues.

Stomp the musical has played there since 2007. And Rolling Stones member Ronnie Wood played a one-night gig at the Ambassadors in 2010.

Past shows at the Ambassadors Theatre

Since 1999 the Ambassadors has shown Some Explicit Polaroids by Mark Ravenhill, Spoonface Steinberg by Lee Hall, Krapp's Last Tape Al Murray the Pub Landlord, Marie Jones' Stones In His Pockets and The Watermill Theatre's production of Sweeney Todd. Recently it has been home to Love Song by John Kolvenbach, Whipping It Up by Steve Thompson and the Menier Chocolate Factory's version of the massive hit, Little Shop of Horrors.

The Ambassadors Theatre provides an infrared system. Both guide dogs and hearing dogs are allowed in the auditorium, or staff will gladly dog-sit for you if you prefer. There are serious spatial restrictions because of the theatre’s design, so they can only accommodate wheelchair transfers.

We’re a top destination for a wide variety of seat types and prices, with excellent availability on the full range of Ambassadors Theatre tickets.