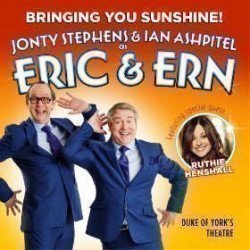 About Eric and Ern

Olivier Award-nominated duo Jonty Stephens and Ian Ashpitel bring their nostalgic show to the Duke of York's Theatre stage. Fun for the whole family from ages 8 and up, Eric and Ern is a brilliant vaudeville production chock-full of hilarious comedy sketches, the Mr Memory...'Arsenal' to the paper bag trick, and a Greig Piano concerto.

A spectacular homage to the legendary English comic double act, Morecambe and Wise, who worked in film, radio, and variety, Eric and Ern will have you laughing yourself silly as it hits all the right comedic notes. Tickets for Eric and Ern at the Duke of York's Theatre in London are bound to sell quickly, so be sure to grab a hold of the best tickets available whilst you can!

Morecambe and Wise live on

Lovely show especially for those of a certain age, but, this should appeal to all ages. A wonderful laugh from start to finish.

All the old gags but they still made me laugh

Great show, thoroughly enjoyed it. All the old gags plus a few new ones; standing ovation at the end... travel is easy to this central location. Keep up the same, same, routines

I loved the show great look a likes and they sounded just like them had the characters to a T ... If was like sitting back in time when they were alive and watching it from them ... Was a outstanding show!!

Suited to older generation who enjoyed eric and ernie. First half a little slow.

Reviewed on 23 January 2014 by Anonymous