Now showing at Her Majesty's Theatre

Now Open Phantom of the Opera

4.8/5 - based on 3219 reviews - (Read reviews) 4.8 3219 reviews Tickets from £27.00
Families (81%) Couples (93%) Theatregoers (95%) i
The Phantom is a story that has captivated audiences from all over the world, a dark tale of love, obsession, revenge and tragedy set to a musical score that makes the heart soar. Based on a French thriller by writer Gaston Leroux, it’s a visual and aural feast of lavish costumes, eye-popping special effects, wonderful soaring music and superb acting.
Show info Book tickets
Phantom of the Opera tickets

Disabled theatregoers and their carers can get discount tickets. Please phone Her Majesty's Theatre access line on 020 7087 7966. 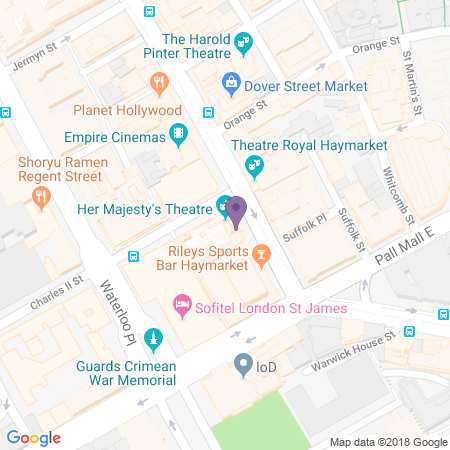 Her Majesty’s Theatre presents a suitably majestic, ornate and very impressive frontage to Haymarket, with its fancy pillars and creamy stone lit up to impress. Inside it’s decorated in peach and gold, and includes the famous chandelier first fitted there for Sir Andrew Lloyd Webber’s all time smash musical hit, Phantom of the Opera.

Her Majesty’s Theatre architecture and history

There was once an older theatre on the site of Her Majesty’s, established by playwright John Vanbrugh in 1705 and called the Queen's Theatre. Despite the apparently dreadful acoustics, the original building hosted more than 25 operas by Handel between 1711 and 1739 as well as numerous masterpieces by Bach.

After a fire destroyed its predecessor, the theatre re-opened to present London opera premieres from Mozart, Rossini, Bellini, Verdi and Beethoven, giving it the nick name The Italian Opera House and making it a prime destination for the celebrities of the day. Then there was yet another fire… and yet another new building, which premiered the opera Carmen in 1878.

With its previous incarnation eventually demolished in the 1890s, the current Her Majesty's Theatre was designed by Charles J. Phipps, built in 1897 for the famous actor-manager Herbert Beerbohm Tree, the founder of the Royal Academy of Dramatic Art at the theatre which had its home there in the early 1900s. Mr Tree created a run of spectacular Shakespeare plays and classical works, hosting premieres by theatre greats George Bernard Shaw, J. M. Synge, Noel Coward and J. B. Priestley.

Since World War One Her Majesty’s Theatre has hosted any number of large-scale musicals and specialises in lavish musicals to this day because of its especially wide stage. The World War I stage sensation Chu Chin Chow broke box office records, as has Andrew Lloyd Webber's The Phantom of the Opera, which has played continuously there since 1986.

Grade 2 listed in 1970, it has been owned by Sir Andrew Lloyd Webber’s company, the Really Useful Group, has owned the building since 2000 and the land it sits on is leased long term by the Queen’s Estate.

Hauntings at Her Majesty’ Theatre

The current home of The Phantom of the Opera Her Majesty’s is reputably haunted by Sir Beerbohm-Tree, who has been seen by actors and audience members alike hanging around his favourite box, to the right of the stage.

Past shows at Her Majesty’s Theatre

All time classic musical show West Side Story enjoyed 1000 performances at Her Majesty’s Theatre, and Fiddler on the Roof managed an impressive two thousand performances.

We’re a popular destination for a wide variety of seat types and prices, with excellent availability on the full range of Her Majesty’s Theatre tickets.