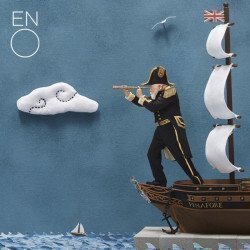 A clueless Captain, a spirited siren and pompous petty officers. No wonder they’re all at sea.

Gilbert and Sullivan’s comic opera HMS Pinafore is a hilarious tale of love, honour and duty.

Packed with absurd characters, unforeseen plot twists and a delightfully farcical finale, Pinafore is a satirical take on the British class system and the promotion of unqualified people to positions of power.

When Josephine, the daughter of Captain Corcoran, falls for the lowly sailor Ralph Rackstraw, she’s torn between her heart’s true love, and her desire to honour her father’s wish for her to marry Sir Joseph Porter, the First Lord of the Admiralty.

Making his operatic debut as Sir Joseph is the actor and entertainer Les Dennis. He is joined by John Savournin as Captain Corcoran, with ENO Harewood Artists ElganLlŷr Thomas and Alexandra Oomens as Ralph and Josephine. ENO favourite Chris Hopkins conducts.