Review: MY BRILLIANT FRIEND at The Olivier Theatre, National Theatre 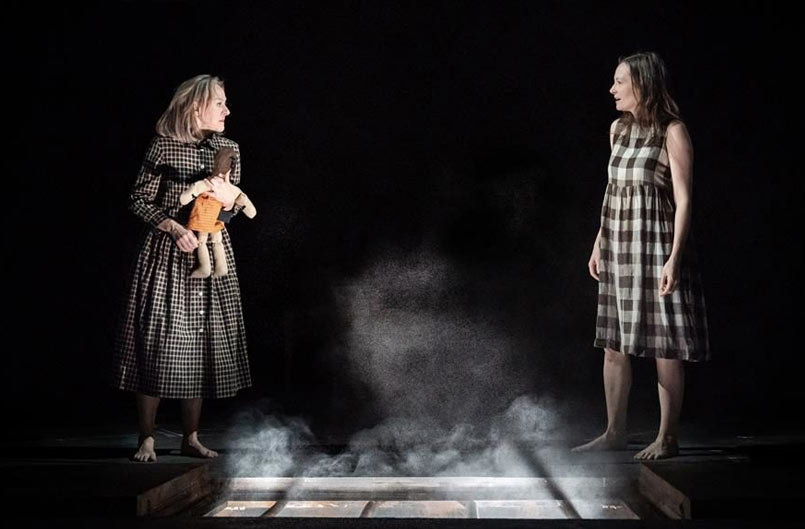 Niamh Cusack (Lenu) and Catherine McCormack (Lila) in My Brilliant Friend at the Olivier Theatre. Picture by Marc Brenner.

The play is an adaptation from Elena Ferrante’s Neapolitan Novels by April De Angelis. Part One is from the novels My Brilliant Friend and The Story of a New Name. Part two is from the novels Those Who Stay and The Story of the Lost Child. All four novels are best sellers around the World. One can see why they are so popular. They are compelling stories with character and personality developments, all varieties of human relationships, love, sex, friendships, violence, politics and the arts. It is set in the colourful cities of Naples and Florence. April De Angelis who adapted the four novels wisely kept it simple and simply told the stories. A refreshing and welcome change from some adaptations of classic works infused with interpretations and contemporary reference.

The sets by Soutra Gilmour are brilliantly simple and consist of four structures of steps that are moved around and slotted into each other to create various locations and settings. Although the stories span from the 1950s to 1980s the costumes also by Gilmour were simple and not period specific. This is where the brilliant use of music comes in. Jim Fortune composed some very clever pastiche of songs and music of the relevant periods as background underscoring but at each juncture of a new period, a real hit song of the period is played. Frank Sinatra’s ALL THE WAY for the ‘50’s, Connie Francis’ WHERE THE BOYS ARE for the ‘60’s, the Carpenters’ WE’VE ONLY JUST BEGUN for he ‘70’s, Sister Sledge’s WE ARE FAMILY for the ‘80’s. These songs immediately establish the periods for us, no need for elaborate costumes or prop changes.

The brilliance of Melly Still’s direction at the National Theatre, as demonstrated in her past productions of CORAM BOY and THE REVENGER’S TRAGEDY is now confirmed with this production. The fact that she is able to conjure vividly the hustle, bustle, atmosphere and people of Naples on a bare stage with just four structures of steps is a testimony of her talents. The complexities of human personalities with their aspirations, despair, hopes, greed, envy, jealousy, violence and sexual gratification of the Neapolitan is economically and firmly established within the first few minutes of the play after the short prologue.

An epic saga of six families and the people from a neighbourhood of Naples spanning over 40 decades naturally contains complicated stories and relationships that require at least five and a half hours on the stage to tell. As they are all compelling and fascinating stories, it would not have mattered if it took ten hours. Central to these stories are two fascinating and interesting little girls who continue to keep our fascination and interest up to their middle ages. They are Lenu Greco (Niamh Cusack) and Lila Cerullo (Catherine McCormack). The play and books are essentially the stories of the two girls and their lives in Naples and Florence.

The play starts with a short prologue of the two little girls, meeting and bonding immediately. Lila appears to the stronger of the two. They have a doll each and Lila throws Lenu’s doll into the dark cellar, Lenu retorted by throwing Lila’s doll into the cellar as well. The two girls are therefore equally matched and have a strong bond.

We next meet them at a mixed elementary school (aged about 13 or 14 years old) in which Lila excels in her studies and is the most intelligent of all the pupils in the school.

The poor and violent neighbourhood is steeped in a machismo. No wonder Lila is strong, intelligent, streetwise, violent and feisty, swearing regularly. This Neapolitan male dominated culture, where girls are subservient to the boys and their places are with their mothers at home is alien to her.

Lenu on the other hand is quietly developing her writing skills, fitting in with the expectations of her parents. Both girls’ ambitions are to escape their repressed lives in the neighbourhood with their writing.

Lila’s future as a writer is cut short when her father refuses to let her continue her studies because of his financial situation and sets her to work in his shop. Lenu’s father, on the other hand, continues to support her studies. The girls have an interesting and fascinating relationship that is contradictory. They love and support each other whilst being jealous and destructive at the same time.

Both girls fall in and out of relationships with several of the local boys. Lila, still in her early teens, is propositioned by Marcello Solara, son of a loan shark but marries Stefano Caracci who is a successful grocer. On her wedding night she discovers that Stefano not only gave away the pair of shoes that she designed to Marcello. He has also agreed to be the junior partner in the Solara criminal business (a precursor to the “Camorra” – the Neapolitan’s version of the Mafia). Lila mentally ends the marriage and resigns herself to be in a loveless violent one. Eventually Lenu meets and marries Pietro, a classic professor in Florence.

The girls’ adventures take them in different directions. Lila works in a sausage factory and gets embroiled in left wing politics. Lenu becomes a rich successful writer of novels. Both of them embark on extra-marital affairs because of their unsatisfactory marriages.

Lenu leaves her husband and has an affair with Nino and is pregnant by him. At the same time, Lila is pregnant with her lover, Enzo’s baby. A few years later, Lila’s little daughter goes missing and is never found. Lila in deep despair disappears herself without a trace.

At the end of the play, several years later after Lenu has written a novel about their friendship and the community, a box containing the two dolls that they lost when they were little girls, is delivered to her.

The stories of the other families are concurrently told in both Parts One and Two of the play. The most significant one is of the Solara family. Manuela, the mother of the two boys Marcello and Michele, who work for her, is the head of the loan shark business. She rules over the boys and the community with an iron fist and absolute violence. She is eventually murdered, being caught up in the violent cycle of the Camorra syndicate.

Be warned, there is a scene of violence that even the gorging of Gloucester’s eyes in KING LEAR is nothing in comparison. On the flip side, there is a scene of a sexual intercourse, played in complete darkness and all we hear is the vocal interactions between the couple that is hilariously funny.

This brilliant co-production by the Rose Theatre Kingston and the National Theatre is not to be missed, if only for the two astonishing performances of Niamh Cusack and Catherine McCormack. 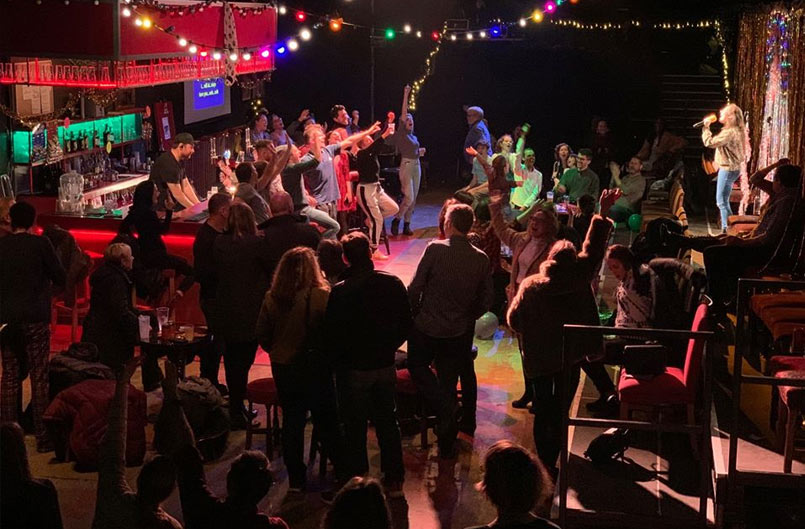 Review: CINDERELLA at The Vaults 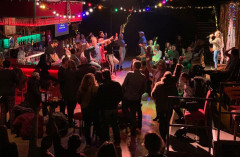 CINDERELLA as reimagined by Luke Barnes and the Not Too Tame theatre company is a raucous smash up of bawdy humour, nodding heavily to pantomime but then twisting, with the ending, the message to suit modern sensibilities.