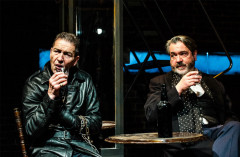 It is always interesting to see how a small theatre company tackles the second longest play in the canon with a roster of over 50 speaking characters – there are more ghosts listed in the cast list than in a typical West End play… Here the Arcola Theatre tackles Richard III with 13 fine actors, a couple of extras and a couple of children; a few suitable costumes and a composite set.

This is a God-less and King-less production. There is no hint that God touches either King – Edward or Richard – and there is no reaction by this production to the sanctity or the majesty of the office. Nowadays, in other contemporary depictions, we are used to make-believe monarchs being portrayed by Claire Foy in The Queen, or Tim Piggott-Smith playing King Charles III. Both are tender and frail monarchs, but the court and courtiers show us the majesty and the god-like aura of their calling by their reactions to them. In Shakespeare’s and Thomas More’s time (Thomas More being the probable writer of the source material) a King was omnipotent and anointed by oils to raise him to deity. Here there is none of that. Indeed, when Richard III is finally crowned, a toast is proffered, and the King is second in line to be offered a beaker. This King is a satanic punk right from the get-go when he is seated in a café drinking wine as the audience enter – the same device Michael Bogdanov used with his Prospero.

But although the aura of majesty and sanctity is missing, as in all Shakespeare, there is something of relevance to today. The Third Citizen has the line “Woe to the land that’s govern’d by a child!” And immediately we look to North Korea and the United States. And though those countries both have leaders who are overtly childish, their courtiers fawn and cheer as their lives depend on their apparent loyalty. There is much that is similar with Kim Jong Un and Richard III, but at the Arcola there is no genuine fear of the despot in the production. Either before or after his crowned.

Shakespeare used a composite set and performed his plays in daylight, so the text is a veritable metrological forecast. Every moment is described to the audience in the text. But the lighting designer chooses to ignore these and do his own thing. So an exterior dark November night described as “The lights burn blue. It is now dead midnight” is bathed in a golden hue… And the sound designer chooses to emphasize every single moment with a soundscape of abstract noise. This is incredibly irritating. If there is a dark passage, there is dark music. If we are in a church, there is choral music. If it is morning, a cock crows. (And not in some distant farm-yard but dead centre stage. Each time and in each different location the same animal is reproduced. Loud.) When there are a couple of moments of silence, the respite is welcome. And the text soars.

And yet. And yet. The play works. There is some very fine speaking and the play whistles through. The first act is 90 minutes long and does not seem so. The audience was held enthralled. The dramaturges have done a good job.

Be warned. Where I sat – on the opposite side of the bulk of the seats – I could not see any of the action on the top areas and there are bright reflected lights from the main rig shining into the audience. Try and sit in the centre block or in the area by the main entrance. 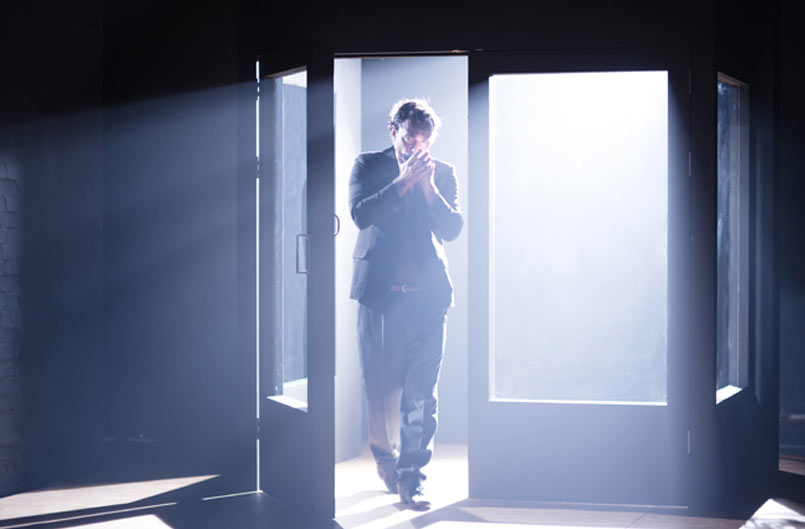 Review: OBSESSION at The Barbican Centre 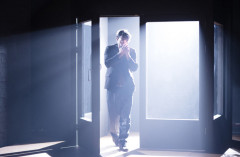 Ivo van Hove is currently one of the most acclaimed theatre directors in the world. His 2014 production of A VIEW FROM THE BRIDGE has forever changed my understanding of not only approaching well know texts but also of the possibilities that the exploration of both time and space can create for theatre makers.